MM Online - Malaysians for Trump: Where are the mirrors? 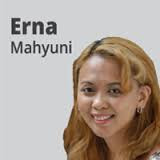 NOVEMBER 9 — I get why there are Americans voting for Trump, particularly the staunchest of Republicans. What baffles me is seeing the love for Trump in places such as India and, hello, Malaysia.

The Star recently highlighted one Malaysian who emigrated to the US who had proudly declared his support for Donald Trump.

I am confused; is there some mirror that non-Caucasian Trump supporters glance into that erases their ethnicity?

From what I've seen of Trump rallies, they're whiter than Malaysian school uniforms. A sea of Gardenia bread and yet there are immigrants and non-white people who aren't even American citizens supporting someone who would be too glad to throw them under the bus.

There is, apparently, a big group of Asian-Americans also supporting Trump for his purported “family values.”

Is it family values for a man to cheat on all three of the women he married? To sexually objectify his own daughter and allow someone else to do so in front of him? It is perplexing.

I've had other people tell me as well that their own Asian relatives abroad have been professing their support for Trump. Perhaps this is a sign that being socially conservative is something that goes beyond colour and class.

It is as though by shouting and declaring themselves against the undesirable immigrants, it will legitimise their own position in the countries they choose.

Malaysians are just as awful in their own locales, to be honest. Look at how we embraced supporting the good-looking-in-the-Caucasian-way Syrians and Bosnians but frequently denigrate Bangladeshis and Indonesians.

If there's one thing the British ingrained in us, it's classism.

Dear brown/yellow people: look at your skin. Now matter how loudly you proclaim yourself as allies to people like Trump, they will never treat you as an equal. It is perfectly conceivable that Trump, after getting rid of illegal immigrants, would likely turn his attention to the legal but unwanted ones.

He's pledged to get rid of Muslims; he's made disparaging remarks about Jews, despite his daughter marrying one. There is only one colour that matters to Trump and it's definitely not brown nor yellow.

Wakakaka, author Erna Mahyudi has been spot on. For a moment I thought she was giving it to RTA, when I then remember she mentioned Dear brown/yellow people.

Once (many many many years ago) I was on a bus in London when someone naughty, probably a kid, was pressing the bus bell frequently, presumably for the fun of it.

Whoever was the culprit sure as hell pissed off the driver, who stopped the bus by the roadside, its engine still running, and threatened not to proceed unless the culprit was caught or confessed to his/her naughtiness.

Obviously no one raised his or her hand which panicked the Jamaican woman conductor. She looked around desperately, hoping someone would confess and satisfy the driver's furious demand, in many ways showing she was shit scared of the angry white driver.

There was then a long period of silence and still no one confessed or was pointed out as the one responsible. The Jamaican conductor and I were the only non-Caucasians on board, so guess who she pointed out in her desperation to show the driver she knew who the culprit was, wakakaka.

She was such an panicky woman that for all her bus-conducting experience she did not even notice where I was standing (in the middle of the standing aisle) had no nearby bus bell  for me to ring frequently.

Those standing near me could be seen shaking their heads either to as if say "no way, not sweet kaytee" (wakakaka) or in disapproval of her falsehood.

I frowned at her and asked rather slowly and angrily (actually I wasn't angry but pretended to be, wakakaka) why she lied so blatantly, raising my voice incrementally as I completed the sentence.

By which time the bus driver realized her nonsensical accusation (probably he might have known her character as well), and quickly attempted to mollify me, saying the matter was over and he would continue the journey. He even smiled at me as he said that, wakakaka.

I was a bit of a, shall we say, sadist (wakakaka), so I looked at the driver and riposted "Not so fast. This woman has just made a very serious lie against me, and I want some accounting. I may have to report the matter to the company"

That really panicked the woman conductor even more, driving her into immediate and profuse apologies.

To cut the story short, I dropped the matter after some persuasion by the driver. I was in a way sad that the Jamaican woman, herself probably the target of Caucasian racism, saw fit to be racially biased against me, another non-Caucasian.