Lawmakers too slow to tell PM the hard truths 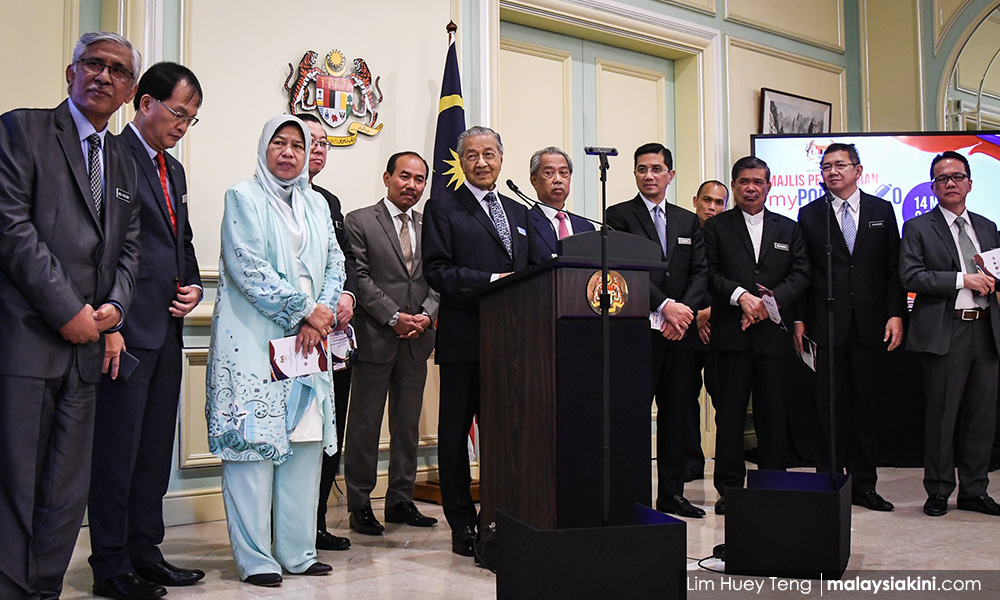 COMMENT | Some 10 days ago, a Sarawak MP whom I consider a dear friend sent me his press statement ticking off controversial preacher Dr Zakir Naik.
He said that he would be writing to the prime minister with a request for Zakir to be deported, adding forcefully that it was his unequivocal stand.
About the same time, the leader of a Pakatan Harapan division in Sarawak also forwarded his anti-Jawi khat statement to me.
To be honest, I consider the statements from my two friends no longer newsworthy at that time. It was a little too late.
Why? This was after the Zakir Naik controversy has been brought up in the cabinet by three ministers and after Dr Mahathir Mohamad had also rebuked the preacher. The prime minister said that Zakir has “crossed the line” by wading into politics here.
By that time, the editor of any publication would probably have received dozens of similar statements. So much so that he would give very low priority to those coming from an ordinary MP or a division party leader. In all likelihood, they would not see their statements in print.
If I were the editor on duty, I would treat such statements the same way – spike them. As these politicians are personal friends, I then suggested to them to post their opinions in their party’s blogs or on Facebook.
Why am I bringing this up now after 10 days? Because I am disappointed that some Sarawak Harapan politicians only seem to be good at parroting their party bosses in the peninsular.
No, they would not speak up even when they were aware of the purported misdeeds of Zakir a long time ago. They have to wait until it was “safe” to do so, that is after their top leaders had made the first moves.
For this reason, I appreciate the quick action taken by Harapan MPs like Charles Santiago (Klang) and Wong Tack (Bentong). Santiago spoke his mind against Mahathir making unilateral decisions while Wong continued with his opposition against the six-month renewal of the company involved in the rare earth plant.
Santiago and Wong are from DAP, but they can see the wrongs immediately and speak up gallantly. They are probably prepared to put their political careers on the line as some of their comments would surely not go down well with their DAP bosses.


Penang Deputy Chief Minister II P Ramasamy and Selangor assemblyperson Ronnie Liu (photo) are another two outspoken politicians.
Ramasamy took on Zakir like the real Indian Malaysian hero and was hardly bothered by the preacher’s threats to sue him.
Meanwhile, Liu was prepared to step on Mahathir's toes, telling the prime minister in no uncertain terms that he must fix a date when to step down. Liu had rightly explained that the uncertainties surrounding the transition date were not doing the Harapan coalition any good.
Ramasamy and Liu are also from DAP. Ramasamy is a former academic, was never a political sycophant and probably not keen to play by party rules. However, he is a dedicated deputy chief minister in Penang and is respected by his colleagues in the state cabinet.
Liu rose from the DAP grassroots. He could have enemies within Selangor DAP, but party bosses recognised him as a long-time DAP loyalist.
Liu has never lost his outspokenness, even after previously being put in cold storage in Selangor. He continues to speak up on issues, even at the risk of antagonising party colleagues. I consider Liu’s gung-ho persona his plus point.
The other personality from DAP who regularly makes his voice heard is Zaid Ibrahim. It’s a pity DAP did not field him in GE14, otherwise, he would have been an asset to the cabinet.
I feel that some of the younger DAP parliamentarians are a total “waste” in Parliament, including one or two underperforming ministers. Zaid would certainly make a more effective lawmaker.
Call Zaid a maverick or whatever name, the former minister has always articulated his arguments well and put forward sensible pointers for others to digest.


Yesterday, Zaid (photo) gave our schoolboy minister Syed Saddiq Syed Abdul Rahman a rubdown, telling him that “Malaysia needs leaders with patience, who don't think that engaging with different groups is a waste of time”, among other things. He also took a sarcastic swipe at Syed Saddiq after the latter hosted a dinner for Zakir.
I wish Harapan leaders in Sarawak would dare to speak up fearlessly when there is a need to, without waiting for their party bosses in the peninsular to do so, and then parroting them later.
It does make me wonder why it took them so long to see that Zakir is “bad news” from the start. Why were they not aware that Sarawak has also barred the controversial preacher from entering the state?
On record, I have written three articles on Zakir in this column, beginning in March this year, then in May and June. It did not take me long to come to the conclusion that Zakir’s presence in Malaysia will bring no benefit but only chaos to our multiracial, multireligious and multicultural society.
I hope lawmakers would act quickly to give the prime minister feedback on the activities of foreign extremists in the country and other potential threats from outsiders. They must dare to tell the prime minister the hard truths as soon as they know of its existence.
Mahathir recently said that his job as prime minister now is “three times heavier”. Are the ministers helping out to relieve the grand old man of some of his tasks?
Or are they still waiting for instructions from the prime mister and not plucking up enough courage to implement policies and programmes in their respective ministries?
Ministers and lawmakers, don’t expect Mahathir to run the country alone. Don’t expect him to do everything and know everything.
You are paid to do a job, and that is to speak up quickly when something is not right and to resolve the nation’s issues collectively as a coalition and as was promised by Harapan going into GE14.
FRANCIS PAUL SIAH heads the Movement for Change, Sarawak (MoCS) and can be reached at sirsiah@gmail.com
Posted by KTemoc at 5:30 pm