Hong Kong (AFP) -- Shocking scenes of pro-democracy protesters at Hong Kong's airport beating two men accused of being infiltrators have sparked soul-searching within the movement over whether a minority of radicals are undermining their cause.

Debate has appeared on web forums used by protesters -- and one group even issued an apology -- after Tuesday night's chaotic scenes in which paranoia about undercover police reached new heights.

In separate instances during a paralyzing occupation of the city's airport two men found themselves at the mercy of a mob.

One was accused of being a mainland police officer and another of being a spy masquerading as a journalist.

Both were detained, had their limbs bound by zip-ties and were beaten until crowds of fellow demonstrators and firemen managed to usher them to waiting ambulances.

Beijing, which has refused to offer any concessions to protesters, jumped on the assaults Wednesday, accusing protesters of adopting "terrorist-like actions".

Within the protest movement there was a palpable uneasiness over how Tuesday's violence had unfolded.

"After months of prolonged resistance, we are frightened, angry and exhausted. Some of us have become easily agitated and over-reacted last night," one group, which has organised anonymous press conferences featuring protesters, said in a statement emailed to journalists.

"For this we feel pained and dispirited and would like to express our most sincere apologies," the statement added.

On the Reddit-like LIHKG forum used to coordinate protests, some voiced dismay over the violence. 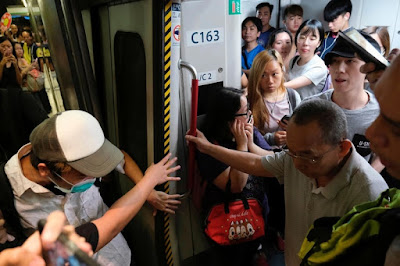 Kwok pleaded with the largely young protesters not to beat the man.

"We shouldn't do anything to harm him," he told AFP, recalling the night's events.
"Even if he was actually doing something unlawfully, we should not get into the same position as the government or the police," he added.

Yet some within the protest movement remain unapologetic.

One 19-year-old, who wanted to remain anonymous, admitted to hitting one of the detained men.

"I don't think this is going too far. They are the enemy," he told AFP. 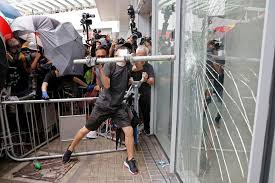 As I mentioned before, a genuine (sincere) protest would usually extend into an anarchic riot, when the young brats become too bored to go home.


Hong Kong's original protestation against the bill for extradition to China has morphed into demands for greater autonomy and EVEN independence from China, and metamorphosed into beating up cops and even journalists (doesn't matter where journalists hailed from but they have been journalists), and causing general disorders which have affected foreign tourists and overseas visitors as well. 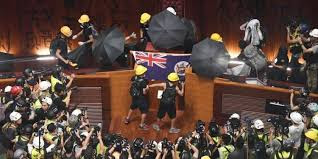 I saw on Aussie TV a scene of a Mat Salleh man grumbling and complaining to a masked protester that (words to the effect) "Look, the protest is between you and your Hong Kong government. Why are you involving us foreigners?"

Chaos is beautiful to an anarchist. 'Tis the preference of young bored and idle brats. 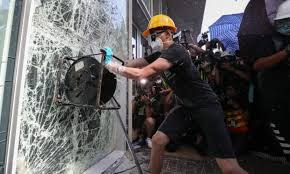 Supermarket trolleys were ladened with heavy stuff and rammed into shop window - protest against Extradition Bill? 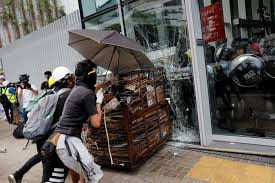 But eff Hong Kongers - let them sort out their own problems or created problems.

What I worry about is that some young Malaysians seem to have the same idea. Watch it mates, very few governments in the world tolerate anarchic chaos.
Posted by KTemoc at 6:53 am