THE POWER OF ZAKIR NAIK – EVEN MAHATHIR CHICKENS OUT: NO DEPORTATION OF ‘TERROR GURU’ FOR NOW – MAHATHIR

Controversial preacher Dr Zakir Naik will continue to remain in Malaysia for now, according to Dr Mahathir Mohamad.

Asked during a press conference in Putrajaya this afternoon if he had changed his mind about deporting the Indian-born preacher, the prime minister replied, “At this moment, there is no change.”

Previously, Mahathir said Zakir had crossed the line when he touched on racial politics.

“Religious teachers can preach, but he was not doing that. He was talking about sending Chinese back to China and Indians back to India. That’s politics,” he had added.

Not unexpected, Mahathir has long been notorious for his Machiavellian mafulat-ish manoeuvring, saying one thing when under pressure and then resiling on that when he believes the pressure is off.

Don't ever trust Mahathir - just recall what he said about manifesto promises, to wit, "Please remember manifesto is not a bible. It's a guide."

And he has been the worst in meeting the pre-election pledges, for example, taking in frogs from UMNO which he had sworn he won't. And then trying to be the Education Minister which was a pre-election no-no - it had to take some vigorous objections form PKR and DAP before he rescinded from his pompous belief he was the best choice for the education portfolio - mind, he picked a lemon from his own Party as his substitute which has subjected Malaysians to baffling perception and angst on his so-called "new" Malaysia - Podah. 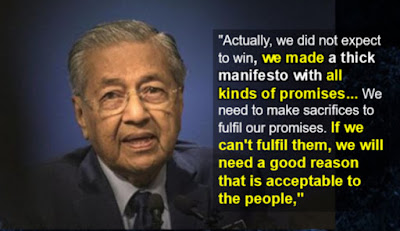