He is just another conniving, wicked autocrat

Yoursay: Even Mahathir is enthralled by Zakir Naik 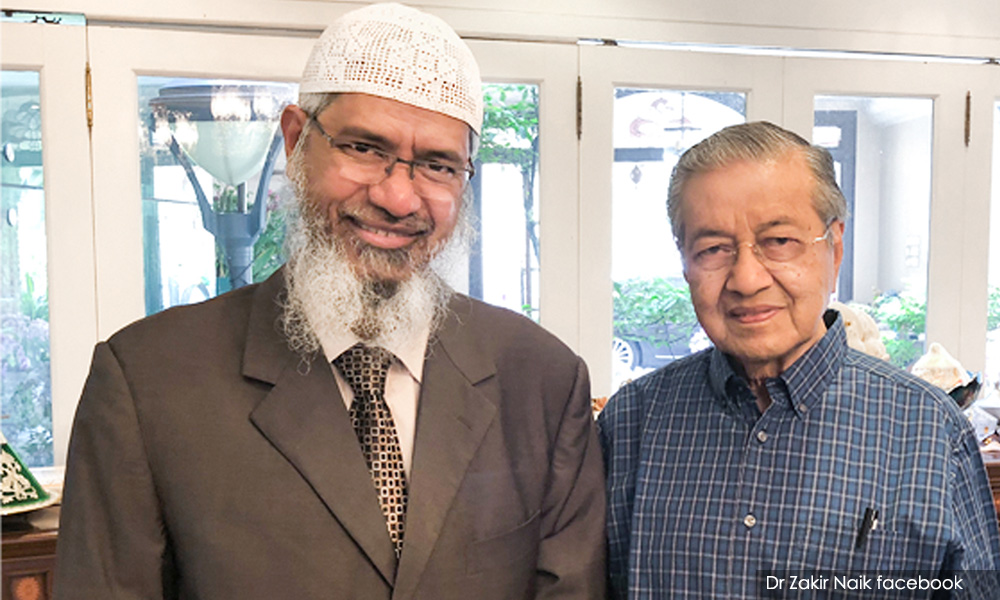 YOURSAY | ‘I feel embarrassed every time I see photos of Mahathir with the preacher.'
No deportation of Zakir Naik for now – Mahathir
Vijay47: Prime Minister Dr Mahathir Mohamad, this blowing hot and cold as the moment suits you does not augur well for the country.
When the nationwide furore over Dr Zakir Naik’s performance in Kota Bharu first broke, you seemed genuinely furious and concerned, even with more than a touch of regret, that you had showered so much tolerance, affection, and leeway to the renegade from Mumbai.
Your outraged stand gave us considerable comfort and assurance that Zakir's offensive and divisive conduct would soon draw to a welcome close.
This was especially so when we recall how you earlier appeared willing to offend a longstanding friendship with India.
You even had the cheek to say that this foreigner holed up in Malaysia could not be certain of receiving a fair trial in Delhi, you had the gall to describe the charges he was facing as politically trumped-up.
Sir, you were acting as though you were his defence counsel, ignoring the fact that you are the prime minister of this country. You have changed tack again and now seem hesitant to deport him.
What has Zakir done since Kota Bharu to earn this further compassion from you?
You seem willing to sacrifice our relations with another sovereign nation, a bond that goes deep into and beyond history, for the sake of this extremist dangerous fanatic on the run from the law.
In the Mahabharata, Dwaipayana Vyasa says, “To save the family, abandon a man; to save the village, abandon a family; to save the country, abandon a village; to save the soul, abandon the earth.”
I pray, sir, that your soul is safe.
What good has this fugitive done for our country? Nay, what good has he done for even his own religion?
Is a person whose only skill is not the glorification of his Islam but the running down of other faiths such a blinding light of religious guidance?
And to add to the adulation, suddenly there appears on the horizon voices protective of this bigoted alien’s “human rights on humanitarian grounds."
If Zakir were a Christian priest, I would have hung my head in abject shame and beseeched God’s mercy on my soul.
CHKS: I am doubtful the 10 hours "grilling" of Zakir until past 1am was really grilling.
Anyhow, reading between the lines of what the news said over the last few days, this shouldn't come as a surprise that Zakir is still here and I can see he will be here for quite some time.
Anonymous 770241447347646: Zakir is one of the figures on a chessboard in a political game.
The question is what is Mahathir up to. To use Zakir to win the Malay votes for Pakatan Harapan or to use him to unite the Malays, so that in the 15th general election, there will be a new coalition.
In a political game, the object is to win in whatever way you can. Mahathir is an experienced player as we can see in the last election. He led a coalition to win against all odds.
Let us not jump to conclusions as to the motive of Mahathir. It is advisable to give him time to explain his actions.
Veritas: People are beginning to slowly realise that Mahathir and the general Malay-Muslim political game. I see less hagiography of Mahathir, who is now seen as a false saviour. Of course, Zakir is an asset to him and the Malay-Muslim hegemonists.
The fact that such a man is an asset to the Malay political class means that Malaysian society will continue to be second rate, where innovation will be left to other countries, except for khat and even that I am not sure, and the ordinary Malay's economic well-being will stagnate.
The Chinese population will keep shrinking in Malaysia and their economic dynamism will continue to erode. Soon though, Malaysia will again be sending bunga emas to China. It is already happening.
Mahathir, Zakir, and the Malay establishment are gutless to condemn China on the Uyghur issue, for all their local bullying of non-Muslims. Imagine US doing anything like China.
The good news is that when Malaysia deteriorates, there is the Islamic religion as the antidote. I think Mahathir is right in preparing for a dire future for the Malays – Vision Poor Man's Superiority.
Mahathir never had the capability to realise Vision 2020 because he has always been a Donald Trump-like narcissist, except less noisy.
Mo Saladin: This is absolutely myopic of Mahathir. Harapan will lose the next election, evidently based on the current groundswell, and the master manipulator, Zakir, will be back on the pulpit germinating and radicalising thousands of young Malay minds, not only on how to take care the "old guests" in this country but far worse.
We do not need to have such a polarising figure here, more so when he has a safe haven in Saudi Arabia.
For heaven’s sake, Mahathir, where are your faculties when we need it most for the greater good of this nation?
Unspin: As a Malaysian, I feel embarrassed every time I see photos of Mahathir with Zakir, particularly the one showing them sitting down together at Mahathir's office.
It looks like Mahathir was star-struck in the presence of 'his holiness' Zakir.
Come on, Mahathir, you are the leader of Malaysia – a peaceful and prosperous nation of 33 million people. You do not have to pander to an outcast preacher who is allegedly involved in money laundering and terrorism.
Give us some dignity, please!

My2cen: Mahathir only serves Mahathir. He is keeping the dog on a leash and from barking for now, and he will let the dog out when he thinks he needs to.
It’s very stupid of Mahathir – people were willing to overlook and almost forgive him for all the corruption and rot he started during his first 22 years – he had a big opportunity to serve the people before he goes to meet his maker, and yet he chose to continue with his old ways.
He is either wrapped in a time capsule, or he is just another conniving, wicked autocrat. Either he is senile or a very bad person. I thought he still had a heart, but alas, I was wrong.
Posted by KTemoc at 10:25 am