Spirit of UMNO lives in Pribumi 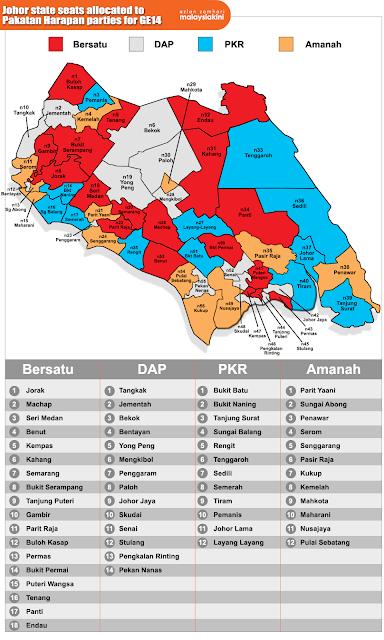 Once again, Pakatan has allowed newcomer Mahathir's Pribumi to take the lion's share of state seats in Johor.

Azmin Ali must be fuming considering PKR and Amanah came out last in the seats allocation with only 12 each, while Pribumi grabs 18 and the DAP 14.

Mahathir has not only been designated as Pakatan's PM-to-be but has hijacked Pakatan for his private agenda. The spirit of UMNO lives in Pribumi.

Up until the point Bersatu joined Harapan, it was assumed that Amanah, being the offshoot of PAS, would take up all of the Islamist party's seats.

However, the Harapan state seat negotiations in Johor ended with Bersatu taking up most of the seats PAS contested in GE13, with 15, while PKR took another five, leaving Amanah with 11 of its predecessor's seats.

The only gain Amanah made is in Kemelah, which it took from PKR.

Looks like Amanah has lost out again after its Johor Division had earlier boycotted Pakatan get-together when it was allocated only 2 federal seats while newcomer Pribumi sapu 5.

The 9 mixed-seats should ideally go to PKR as that's what the party professes to be, a multiracial party. Why has it gone to Pribumi, a ketuanan Melayu party which no Chinese nor Indian can ever dream of joining?

Indeed Pribumi has truly hijacked Pakatan.
Posted by KTemoc at 2:39 am