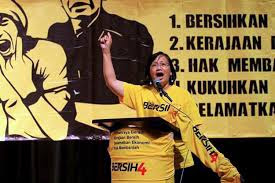 I wonder whether she knows that BERSIH, the organisation she heads, was supposed to be a non-politically aligned NGO as it was during Ambiga Sreenevasan's days. BERSIH had then concerned itself with ONLY the Malaysian election business, playing watchdog to the dodgy Malaysian Election Commission.

Let's revisit the concept of BERSIH with a review of what it was supposed to be.

The Coalition for Clean and Fair Elections (Malay: Gabungan Pilihanraya Bersih dan Adil) or Bersih (meaning clean in Malay) is a coalition of non-governmental organisations (NGOs) which seeks to reform the current electoral system in Malaysia to ensure free, clean and fair elections. […]

In April 2010, the coalition was relaunched as an entirely civil society movement (BERSIH 2.0) unaffiliated to any political party.

In pre-Maria Chin days, I recall once Ambiga fended off Anwar Ibrahim's attempt to 'hijacked' a BERSIH rally for his own agenda.

Ambiga told Anwar off, reminding him that BERSIH was about electoral fairness, cleanliness and accountability and not for Pakatan to misuse as a political platform. 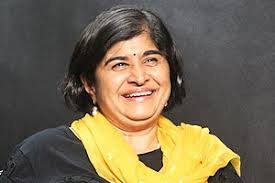 That didn't stop Anwar, wakakaka, because in BERSIH 3.0, Anwar and his sidekick Azmin were alleged to have hijacked it, when allegedly, one of PKR members deliberately breached police barricades leading to ferocious police reactions. Both sides (Police and alleged PKR participants) were sadly bloody wrong, but that's a story for another post.

Since Maria Chin Abdullah took over BERSIH, she decided that BERSIH should also depose of an elected PM, and to also rally against the alleged crimes of 1MDB.
Hasn't Bersih under Maria Chin Abdullah gone songsang-ishly partisan from its original charter?
I hope you understand what I mean by 'gone partisan' from a political perspective.

Remember, BERSIH was relaunched in April 2010 as an entirely civil society movement (BERSIH 2.0) which was supposed to be unaffiliated to any political party.
Does Maria Chin have the right to change that BERSIH's charter?

Yes, but Maria Chin should inform Malaysians BERSIH is NO LONGER an unaffiliated NGO. In reality, it is affiliated to Pakatan.

If Maria Chin has the gumption to do that with honesty as she should, the downside is that it makes BERSIH, an electoral watchdog, encumbered with the baggage of political partisanship.

Partisanship makes the NGO task of ensuring free, clean and fair elections far far far more difficult if not impossible, because the BN side of politics (I include PAS within this group) will NOT believe any of its pro-Pakatan words about any alleged dodgy-ness perpetrated by the EC.

Sad that Ambiga's vision was not followed.
I first suspected BERSIH had gone songsang from its original (Ambiga-era) charter when Maria Chin Abdullah praised a former RMAF officer as a hero, and for what you may asked, but for violating Armed Forces Council Instructions. 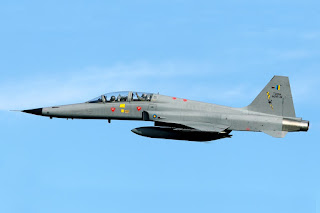 That former RMAF officer was actually not charged by the military for making a police report on the very delible so-called indelible ink provided by our remarkable EC as many have incorrectly believed, but for doing unauthorised song & dance announcements in front of the media.

No military personnel could do such a thing whether it had involved the election or on any other matter. That RMAF officer's wife (also a RMAF personnel) who similarly made a police report on the ink provided by the EC but did NOT speak to the media was not charged.

Maria Chin Abdullah lacked judgement in over-hastily praising a military officer who had violated military instructions. It would not be wrong to say she might have praised that officer because she thought he had spoken out against the ink in an unauthorised song-and-dance press conference, instead of realising that officer violated Armed Forces Council Instructions.

Of course it's a lamentable assumption but alas one that was prompted by her pro-Pakatan inclination.

Additionally, for BERSIH to seek to reform the current electoral system in Malaysia to ensure free, clean and fair elections, it must not, nay, NEVER ever encourage the military to get silly ideas of going political as in her praising a RMAF officer for violating Armed Forces Council Instructions - keep those soldiers back in the barracks. Don't believe me, ask Yingluck Shinawatra. 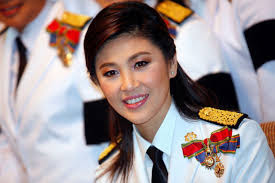 I had written (concluding extracts only):

The general has said something of constitutional significance, so frightening that I believe the defence minister and the attorney-general, the nation’s No 1 law officer, must take a very careful look at this general’s pomposity which has failed to recognise the constitutional roles and limitations of an army in a democracy of civilian rule.

His apparent lack of understanding of the constitutional limits for our Malaysian Army is verging on being dangerous.

I appeal to the defence minister and attorney-general to take note that a 'Malaysian stitch in time saves a Thai nine'.

As I had pointed out the general's pompous straying outside of constitutional limits, I wonder whether Maria Chin Abdullah is aware that military personnel are NOT allowed to be political or to be always "apolitical"?

The 'apolitical' nature of our Armed Forces has been the fortuitous reason why Malaysia (and Singapore) among SE Asian nations remains free of military coup d'état and draconian dictatorial junta.

I had then wondered how would such a person like Maria Chin would be able to make effective non-partisan advice on electoral reforms. She is just anti establishment instead of being non-aligned as the role of BERSIH demands.
Okay, you may think all the above are just kaytee's prattle tattle, wakakaka, but let's take a look at a 2015 article posted in the renowned loyarburok website, Why I Will Not Attend Bersih 4 in which Abdul Haleem explained why he won’t be there.

This is not going to be well received by many. But let me emphasise the title of this opinion piece. Why I (meaning me, personally and singularly) will not join the Bersih 4 Rally. I am not advocating anyone against joining the rally. I am speaking for myself.

Before you crucify me, let me remind you that I was there for Bersih 2 and Bersih 3. I was briefly arrested during Bersih 2. Google it and you’ll find my opinion piece which I wrote after both rallies. If you need to know, I was based across the causeway and made a point to come down for it. Twice.

Now that I am based in KL, let me tell you why I will not take part in Bersih 4.

I am disappointed with BERSIH 2.0. If BERSIH 2.0 is fighting for fair and clean election, it should have gone all out whacking PKR and Pakatan Rakyat for the KajangGate circus.

What was the outcome of KajangGate? We have a new MB for Selangor and a new ADUN for Kajang. So what did the people of Kajang in specific and Selangor in general gain?

Bersih 2 and 3 was against all the manipulation, corruption and unfairness of our General Election. If Bersih can go all out despite all the odds taking it to the streets for the GE, why did they allow PKR and Pakatan to get away with just with a slap in the wrist for KajangGate?

On both previous rallies — though it was organized by Bersih — on the actual day, it was hijacked by the political parties.

On Bersih 3, all hell broke loose when clowns from PKR got hold of the mic and started the fiery speeches which were very provocative. The cops were no angels too.

During Bersih 3, the moment this particular political figure started his provocative speech, me and my friends got up and left the scene for some chilled drinks. By the time we finished the first drink the whole area turned into a war zone.

We don’t need to be reminded of police brutality during Bersih 3. I surely don’t want to see innocent young ones beaten up for taking part on a democratic process. I don’t think this time around is going to be different.

Yes, it was written by Abdul Haleem, a BERSIH-rally veteran, telling us of BERSIH's double standards in not taking a strong stand against PKR's nonsensical misuse of the election process in the Kajang Gate by-election (I call it the rancid Kajang Satay event), yea, not even a slap on their wrists with a coriander stalk wakakaka. 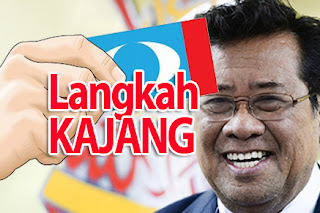 While we could and can understand (though NOT support) the naughty antics of those who hijacked BERSIH 3.0, we could/can NOT understand why Maria Chin Abdullah turned BERSIH into a very partisan anti establishment NGO, when BERSIH has NOT been a pro Pakatan NGO originally.

Come to think of it,  I would have liked to play Sigmund Freud to her personality and psyche, wakakaka.

Recently, Jocelyn Tan of the Star Online wrote Anwar blocks Dr M’s bid for top job, which I had also posted as Anwar Ibrahim against Mahathir as Pakatan PM-designate.

Maria Chin Abdullah must be furious at the article (no, not at poor me, wakakaka but at Jocelyn Tan) because Jocelyn had written: Two leading women NGO leaders had met the Pakatan chairman last week to share their views.

I certainly want to know who these two ngo women are. Certainly disagree with them to boycott elections. (see my earlier posting) Malaysia follows Westminister system and the party with the majority gets to appoint their PM. Jocelyn - dont hide behind unnamed persons. Name them and we can have a debate.

Why has Maria Chin become so personal towards Jocelyn Tan? The latter is just a Star journalist and she is no different from many other pro Pakatan journalists in 'carma'-ing - you can read their articles in The Malaysian Insight, MM Online, Malaysiakini, etc etc etc. Whether she is pro BN or so-and-so is pro Pakatan isn't a monumental issue - just read their articles with some reservations.

So why pick on Jocelyn Tan? It's like Maria Chin picking on all sorts of BN scandals, even those alleged ones, but ignoring the rancid Kajang by-election nonsense.