Ever since I read about Michelle Yeoh going to Bangladesh to visit the Rohingya refugees, I have been waiting for this to happen in Malaysia, and it did: 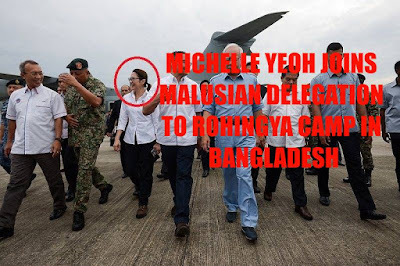 The abuses against her was staggering. The humanitarian reason of her visit was totally ignored.

On the Malaysia Net, there exists no bipartisan stand for, say, humanitarianism, compassion, charity, decency, freedom of expression and silly issues like democracy, democratic choice and democratic preferences.

It's the now-current totally brainless vile vitriolic vicious toxicity of our politics a la George Bush Junior's "You are either with us or against us".

The abuses have been so barbarously obscene it reflect puerile 'Otak-Rosak' Malaysians in the midst of our society.

Earlier Sangeet Kaur Deo (daughter of the late Karpal Singh) had been similarly victimised. Sangeet is a DAP member but had bravely opined that Mahathir was an ill-considered choice by Pakatan as its PM-Designate.

She was abused with the uncouth and insensitive remark for her to go find out from her late father. Distractors vilified her as brainless, but it would seem those who abused her and disrespected her democratic right to express her opinions have been the totally brainless midgets with their otak already rosak.