Who to replace Maszlee as Education Minister?

Dr M or Anwar should take over education portfolio

COMMENT | The writing is clear on the wall. Education Minister Maszlee Malik must go. If he is not prepared to resign voluntarily, which an honourable man should do, then he must be sacked.
Is this another Maszlee-bashing article? Not to me. This piece is to tell Maszlee the truth, the whole truth and nothing but the truth. It’s time for the minister to stop playing deaf and dumb. He must wake up to the reality that he is the weakest link in the cabinet and a great liability to the Pakatan Harapan government.
A Maszlee acolyte like Universiti Sains Malaysia vice-chancellor Asma Ismail will probably think that those who critiqued her boss and master must be doing so for politically motivated aims. She is so wrong!
A VC sharing Maszlee’s priority for “race and religion” is yet another cause for concern. That some top guns in our local universities are guided by such motivations is alarming. Our next generation of Malaysians will become brainless “ducks” and “chickens” if such people continue to be decision-makers in our education system
I don’t care who gets to be appointed a minister as long as he or she is capable, far-sighted and excels in the job. Malaysians voted for a new team to run the country in GE14. We did not vote for half-baked ministers to be part of the administration.
I find little joy in criticising ministers and political leaders. I wish I do not have to waste time and energy picking on the failings of those holding public office. Surely, senior citizens like me have better things to do than to worry about dumb ministers who keep on goofing.
However, the truth must be told at times. Maszlee has been on my radar for months and for good reasons. Since the minister’s announcement that Sarawak will be his “medan dakwah”, I have been keeping a close eye on him.
Maszlee, you can turn your home state into your “medan dakwah” for all I care. Just don’t touch Sarawak. You do not understand Sarawak, or Sabah, at all. The majority of Sarawakians have no respect for you. That’s the honest truth. Chew on it!
A Malaysiakini reader had cheekily said that Maszlee should be a Grab driver. I’m not sure I’ll be comfortable in a vehicle driven by Maszlee. He has no sense of direction.
Seriously, Maszlee is beyond salvation. Dr Mahathir Mohamad has to act and act fast. Surely, the prime minister is not blind. Malaysians have had enough of Maszlee and his penchant for doing and saying the wrong things. One year of Maszlee is a year too long. We have wasted a year with him. We cannot afford to lose more time.
A prominent corporate leader told me recently how he had helped Maszlee during the elections. He lamented how Maszlee did not turn up for events he was invited to despite agreeing to be present. A sign of a character flaw, he concluded.
That's gross irresponsibility in my book. Why, did Maszlee think that accepting an invitation to grace an event is like promising your buddies to hang out at the mamak outlet to watch a football match? What were you thinking, Maszlee?
What is the solution? I think Mahathir himself should take over the education portfolio. Forget the Harapan ruling. If the prime minister is not keen because he has more than enough on his plate, the alternative is Anwar Ibrahim.
Both Mahathir and Anwar have been education ministers. While we might have misgivings during their tenures as education ministers, we must be prepared to take some risks with them now. I believe the risk is worth it. Both are elder statesmen now and I want to believe that whatever they do, they have the best interests of the country and the citizenry at heart.
********
kaytee note: The reason why Maszlee became the Education Minister was because we did not want the PM to hold another ministry and objected strongly to Mahathir's initial ambition. OK, so Mahathir had to scrap the bottom of his Pribumi Party barrel for someone to be in that post he was denied. 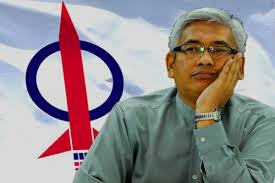 P/S There are several non-Malays who are well qualified but alas, the post is sensitive and has to be a Malay - sorry, nons. Incidentally, Mahathir must NOT be tempted to appoint that Cambridge (USA) graduate, wakakaka.
Posted by KTemoc at 11:53 pm