US Raid on Venezuela Embassy 'A Brutal Act Against Int'l Law': Maduro

He urged the U.S. to respect the human rights of the activists inside the diplomatic headquarters for 36 days by the authority of Venezuelan officials.


The President of Venezuela Nicolas Maduro rejected and repudiated the storming of its embassy by United States police officers Thursday.

The Venezuelan head of state says he gave instructions to take its complaint of the event to the highest authorities and is expecting U.N. member states to make declarations against this violation.

"The U.S. has raided the premises of the Venezuelan embassy in Washington ... a brutal act against international law and lack of respect for embassies in the world," said the president.

"I have told our Foreign Minister Jorge Arreaza, that we should take the complaint to the highest levels and that the U.N. system should rule sooner rather than later on this serious violation of the Venezuelan Embassy in the U.S.," he said.

On another note, he urged the U.S. government to respect the human rights of the activists who were inside the diplomatic headquarters for 36 days by the authority of Venezuelan officials.

Activists had been defending the embassy building since the two governments broke diplomatic relations. However, U.S. authorities and the Venezuelan opposition sought to cut off electricity and water services to the building, as well as prevent food from entering by keeping a siege on the premises daily.

The Iran hostage crisis was a diplomatic standoff between the United States and Iran. Fifty-two American diplomats and citizens were held hostage for 444 days from November 4, 1979, to January 20, 1981, after a group of Iranian college ... took over the U.S. Embassy in Tehran. ...

Western media described the crisis as an "entanglement" of "vengeance and mutual incomprehension." American President Jimmy Carter called the hostage-taking an act of "blackmail" and the hostages "victims of terrorism and anarchy."

What's the difference between Iranian students violating the US Embassy in Tehran in 1979 and American police officers violating the Venezuelan embassy in 2019, both in contravention of Vienna Convention? 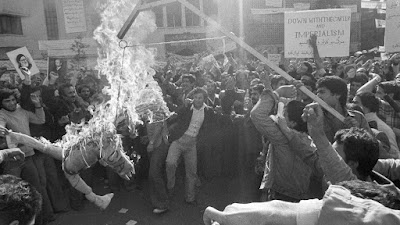 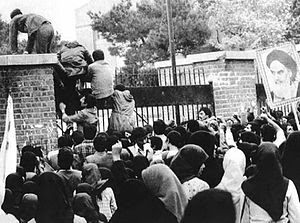 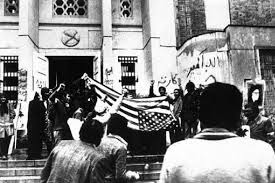 I'd say it's worse on the part of the USA because the American violators have been policemen whilst the Iranian violation was by undisciplined unruly students, not unlike unruly behaviour by BN members violating the Apcet II convention in KL in 2006.

For more of the KL fracas, read Apcet II Disgrace - all for an alien nation!. 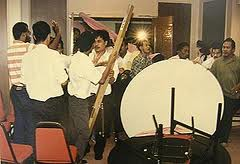