OBEY the teachings of god

Why the disbelief? Moral question on ‘Belief in God’ based on textbook, says HM


PETALING JAYA: The headmaster of a primary school has come forward to clarify a controversial Year 6 mid-term moral exam paper on the Rukun Negara.

The headmaster, from a primary school in Shah Alam, who did not want to be named, said they were just following the government-issued “Pendidikan Moral” textbook printed in 2015.

He said Page 51 of the Year 6 moral education textbook states the Rukun Negara principle of “Belief in God” can be followed by accepting Islam as the official religion of the federation.

“Our question paper follows the textbook. We did not twist any facts,” he told FMT.

The textbook also gives a second interpretation of “Belief in God”, which is to respect all other religions and beliefs of other races. (“Menghormati agama dan kepercayaan perbagai kaum”).

A screenshot of the exam paper was widely questioned by many Malaysians after it was shared on social media.

It showed that the student had answered four questions related to the Rukun Negara but left out the question on what “Belief in God” means.


The student chose not to tick the answer, which states “to accept Islam as the official religion of the federation”, causing her to lose two marks.

“If we follow our marking scheme, the student will not get the two marks because the question was left unanswered,” he added.

The headmaster expressed shock over the wide criticism the exam paper question received from Malaysians after going viral in social media.

“A lot of people have criticised me, perhaps not realising that the question was based on the textbook.

“They should by right ask me for an explanation first,” he added.

The Rukun Negara was formulated on Aug 31, 1970 in reaction to the May 13 race riots in 1969. It was aimed at uniting the various races in the country and is taught widely in schools.

The five tenets of the Rukun Negara are Belief in God; Loyalty To King and Country; Upholding The Constitution; Rule of Law; Good Behaviour and Morality.

As I remember it, the first rukun of the Rukun Negara is:

Now, where does it say that translates into "accepting Islam as the official religion of the federation"?

It is noteworthy that the government-issued “Pendidikan Moral” textbook provides another explanation, namely, to respect all other religions and beliefs of other races. (“Menghormati agama dan kepercayaan perbagai kaum”).

Why couldn't the headmaster use his commonsense and made the other (2nd) meaning the correct answer, and to leave out Islam-centric explanations?

Don't eff-ing use the “Pendidikan Moral” textbook as an excuse to corral non-Muslim students into selecting the answer the headmaster prefers. A headmaster is supposed to be a learned man who is also a guardian and shepherd of young students.

We know of government textbooks like Interlok which has been criticised for the following (extracts of criticism): 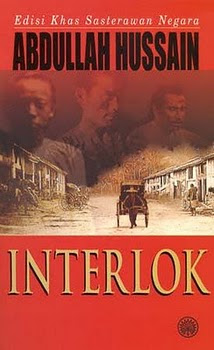 The main Indian character Maniam is a bigamist and irresponsible husband. In fact, Interlok prescribes that “Indians are irrational and violent people” [this surmise within quotation marks is made by the blog Hartal MSM which had gotten hold of a classroom lesson plan designed by the Education Ministry’s curriculum development section].

The Hartal posting ‘When a language lesson isn’t about language’ reveals the Ministry’s insidious pushing of derogatory racial stereotypes in its study guide worksheet.

If you asked anyone from the Indian community how they view their women, he would not hesitate to say that Indians are the most loyal of wives.

Yet Abdullah Hussain depicts Maniam’s first wife as an unfaithful spouse who was ‘enticed’ (ala the Daphne Iking cheating case) by their neighbour.

Meanwhile, Maniam’s second wife, whom he abandoned, is described as responding sexually to her rapist who happens to be the mortal enemy of her husband.

Apart from the implausibility of the plot devices, what Interlok imposes is the pronouncement of one bigoted Malay author on what he promotes as the ingrained character traits of the Indian and Chinese.

SPM students forced to study the book do not hear the genuine voice of an Indian or a Chinese speaking for himself. Instead the students are hectored that an Indian is such and such, that a Chinese is such and such, and are required to accept Abdullah’s cock-eyed view of them because the officially sanctioned prejudicial lesson plans reinforce his slanders.

There are no positive role models among the Indian women characters in Interlok. Among the Chinese female protagonists, again there is a similar type – the vapid wife of the immigrant is left behind in the homeland by her philandering husband Kim Lock. The other woman in Kim Lock’s life is an opium-addicted prostitute in the north of our peninsula who ultimately hangs herself.

Wakakaka, so Interlok was the pronouncement of one bigoted Malay author on what he promotes as the ingrained character traits of the Indian and Chinese.


Want to follow that racist book to its very text?


So, was the above-mentioned Year 6 mid-term moral exam paper on the Rukun Negara with that naughty required answer (1st choice INSTEAD of 2nd choice) also the pronouncement of one headmaster on what he promotes as the only way to believe in god?

To an atheist like kaytee, wakakaka, the more correct answer should be "to respect all religions as these serve us Malaysians to believe in, respect and obey the teachings of god".

OBEY the teachings of god - this seems to be shamefully forgotten.
Posted by KTemoc at 8:34 pm