We know Mahathir; how different will Anwar be? 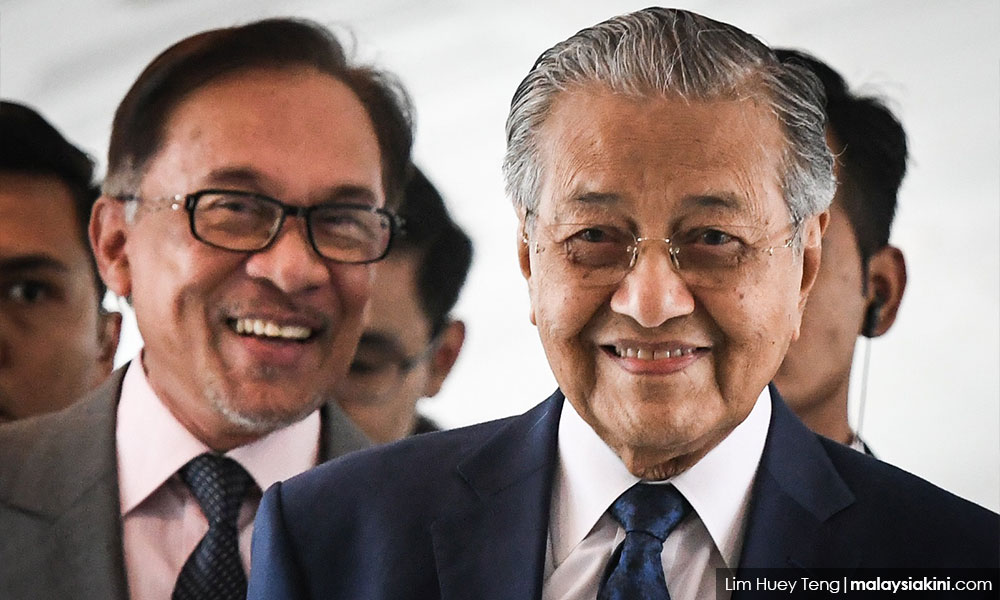 QUESTION TIME | Harapan’s major failure one year since winning the 14th general election is not to firmly put in place changes which would bring about a civil society that considers all Malaysians equal and where the government will be truly accountable to the people.
Now that we have seen what Dr Mahathir Mohamad is about, the question to ask is whether there will be change if and when Anwar Ibrahim takes over within the next year. That will crucially determine the kind of New Malaysia we get.
Exactly a year ago today, most of us adults were focused on one thing - to go out and make our vote count - it was vital that we did because our nation could well go under in the near future - under a morass of debt and theft if we did not kick this kleptocratic government out. But few had any hope that we would.
We all knew by then that the government was allowing the robbery of billions from the country without any check and balance from Umno/BN, almost all of whose MPs unequivocally supported the prime minister, then Najib Abdul Razak, dashing all hopes of a party revolt against a thief.
Najib had used his wide powers under the law to suppress the damning, bucketfuls of incriminating evidence against him, of which the main one was a highly detailed investigation by the US Department of Justice outlining how more than US$4.5 billion was stolen from 1MDB.
Just before that, our own auditor-general had put the money unaccounted for in 1MDB’s accounts at some US$7 billion, just short of RM30 billion. The report was classified secret under the Official Secrets Act (OSA) by the Najib regime, which changed the attorney-general, shifted senior police officers around and even investigated Bank Negara Malaysia officials to intimidate the public and keep the truth under wraps.

The only hope left of stopping this unprecedented kleptocracy, the biggest the world has ever seen, and to stop a corrupt government which also showed itself to be highly incompetent in many other areas and which used race and religion to stay in power, was through the polls.
The unthinkable and inconceivable happened. Malaysians finally had enough of BN and kicked it out of government, after 61 years. Their hopes and aspirations were high and not all of these will be immediately realised.
One year later, without any doubt, the new government is better than the old, but then almost anything else would be given the corruption and incompetence of the previous one. Malaysians have a better government, but that does not mean they should not aspire to more.
Yes, bringing Najib to the courts is an achievement, but what has been done towards governance, competence, accountability and transparency? How much has been done to put in the legislative changes and the institutional frameworks to ensure that 1MDB and similar others never happen again? Precious little.
Constitutional changes are not required for most of these because laws can be annulled and changed by a simple majority in Parliament. Checks and balances can quite easily be set up and consensus building encouraged, instead of individual decisions on a person’s whim and fancy without proper study and consideration.
Mahathir made history not only as the person who became prime minister twice, but also the first time the PM had come from a minority party. But Mahathir is not one given to consensus building - even when the chips are down.
After the elections, the new prime minister was a person from a party that had only the third highest number of MPs among coalition partners, at 13 for his Bersatu against PKR’s 47 and DAP’s 42. Amanah had 11. If consensus was what the other parties expected, that was not to be.
Soon after May 9, the coalition came under threat following Mahathir’s appointment of key cabinet members which heavily weighted Bersatu, a Malay party. Many of the ministers were downright incompetent and inexperienced, including one whose first job ever was that of sports minister.
The education minister has so far inspired no confidence and has done little to show that he understands the problems of education in the country and that he has a plan to turn it around. Eventually, in the full cabinet, PKR (and DAP) had much lower proportionate representation, and a seething, but unstated, resentment emerged.

A tension developed, which exists until today among the coalition partners caused by various shifting alliances, with coalition partners unhappy with Daim Zainuddin (above) taking over many important functions which should have been in the domain of the cabinet.
Effectively, Mahathir used Daim to bypass and undermine the strength of the cabinet. Later he took in Umno members into Bersatu, members who had previously supported Najib, causing much unhappiness within the coalition.
Questions began to be asked whether Mahathir will really be an interim prime minister and whether Anwar Ibrahim will, as promised, succeed him within two years of GE14. It now seems likely that the succession is likely to take place, while Mahathir is given free rein for the time being.
Mahathir had effectively hijacked the reform agenda of Harapan, pleading that manifesto promises could not be kept because they did not expect to win the elections. Not only did legislative reform take a back seat, the report of the Council of Eminent Persons, headed by Daim, was ironically classified as secret under the OSA. What’s there to hide?
As the head of a party whose job it is to protect Malay rights (does it need protection?) Mahathir was not likely to take any steps which, rightly or wrongly, may be seen to be in conflict with the rights of Malays/Royalty.
Thus, there were U-turns in terms of ratifying the Rome Statute and ICERD which showed a strong inclination to side with the Malay right, which not only alienated non-Malays, but also the moderates within the Malay community.

There were U-turns in the economic sphere too, when the RM44 billion East Coast Rail Link was renegotiated and resurrected after Mahathir had firmly turned it down earlier. And so was the RM140 billion development value Bandar Malaysia project at a time when there is a major property overhang in Kuala Lumpur.
We now know what Mahathir is all about and we all have our opinions about how much he has or has not changed, but one thing is clear - he does things his own way, whether other people like it or not, whether there is consensus or not.
Civil society and inclusiveness are not his cup of tea - that may come after he goes, it seems. Transparency, accountability and good governance are for those who come after him, not him. Meantime, he and Daim know best what to do.
The big question is what will Anwar be like when it is his turn? Will he firmly return to the reform agenda? Will he build consensus? Will he be more inclusive? Will he make all Malaysians feel more Malaysian and bridge the racial divide? Will he be uncompromising on corruption, and will he ultimately put an end to patronage?

Will Anwar be a prime minister for all Malaysians? Will he do the right things about education? Will he favour competence over politics? And I am not talking about race here because there are many competent Malays and bumiputeras around, too.
Posted by KTemoc at 6:13 am