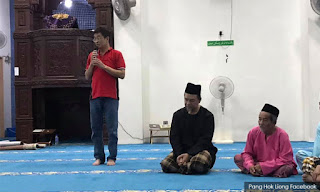 Sultan Ibrahim Sultan Iskandar is incensed over a DAP lawmaker delivering a speech at a mosque, which the Johor ruler said had caused unease.

The monarch accused Labis MP Pang Hok Liong of politicking and challenging the position of Islam.

However, Pang told Malaysiakini that he did not raise political issues, but was merely distributing aid to mosques and surau in conjunction with the month of Ramadan.

A photograph of the veteran lawmaker giving a speech at Majlis Tenang Steysen in Labis on May 10 had gone viral on social media.

Pang was also accused of disobeying a Johor Islamic Council (Maij) circular barring all politicians, except the menteri besar and state religious affairs exco, from delivering speeches for official programmes in mosques.

'... challenging the position of Islam'?

Methinks His Majesty might have gone overboard with poor Pak.

But undeniably, Pakatan especially DAP is currently in the Johor dog house. To wit, t'was bad timing for Pak Hok Liong to do what he did, no matter how innocent he might have been.

Thus Pak, as a member of Mahathir's ruling coalition, has 'caused unease' amongst the Johor Heartland and has defiantly 'challenged the position of Islam'.

Guilty until proven otherwise, Pak is now in Sh*tville.