In May 2010 a 14-year old unarmed boy shot dead by the Selangor police. He was Aminulrasyid Amzah. If not shot and still alive, Aminulrasyid would today be coming to 20 years old.

Now what did Aminul do to deserve a barrage of bullets where 21 of those shots from one policeman hit him fatally (and several from another but which was discounted as contributing to the fatality)?

Did Aminulrasyid commit some heinous crime that required such a drastic reaction from the police?

Was he in the midst of an act that would have resulted in the immediate and direct deaths of others, unless the police opened fire to stop him and his act?


Aminulrasyid was just driving around without a licence, the act of a kid out on a lark - but when suddenly confronted by a police car, he panicked (or didn't want to be caught driving illegally) and sped off.

Did this in itself (speeding off) require the police to spray bullets at him as if he was a terrorist, or a murderer or a bank robber running away from the scene of the crime, or about to commit such violent acts?

So too perished 17-year old Johari Abu Bakar (also in a car when shot dead by police), 23-year old Francis Udayappan, 22-year old Ananthan Kugan and various other Indians when under police custody.

Then Malaysiakini reported in 2012 there was motorcyclist Lim Hup Hwang who was riding without a helmet about 5.50 pm when he arrived at the roadblock.

Attempting to stop Lim, the police personnel kicked the motorcycle, causing the teenager to fall and hit the road divider.

Lim was taken to the Tangkak Hospital and later transferred to a private hospital in Malacca due to the severe injuries on the head, right ear, neck, right leg and other parts of his body.

The daily quoted an eyewitness as claiming that Lim’s motorcycle was kicked because he did not immediately stop after being instructed by the police to do so. 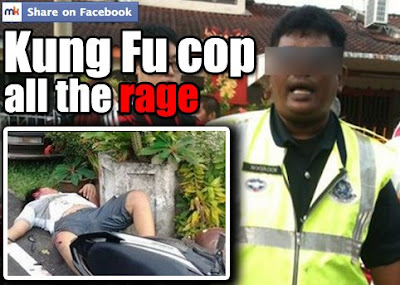 The police as usual laid the blame on Lim as they did on Aminulrasyid Amzah. Like Aminulrasyid, Lim was only 14 years old.

Lim sister revealed: “This policeman argued that my brother intended to hit him with the motorcycle hence the kick. Fortunately, three good Samaritans are our eyewitnesses (to rebut the policeman). Thank you so much.”

To stop Lim, they kicked his bike, to stop Aminulrasyid they shot him.

But remember this police explanation: "... policeman argued that my brother intended to hit him with the motorcycle hence the kick." We will soon come back to it.

Yes, there's more. Pua Bee Chun, a 22-year-old housewife, was killed by police in 2013 in a similar scenario as suffered by Aminulrasyid Amzah. She perished after the police bullets struck her on the chest at Taman Sejati, Klang on 18 Jan 2013. Her death by trigger happy police was in a string of unexplained or innocent deaths caused by police. Her husband told the press the police shot his wife after a car chase.


We could ask the same questions as we did for the case of Aminulrasyid (above), whether Pua Bee Chun was in the midst of an act that would have resulted in the immediate and direct deaths of others, unless police opened fire to stop her?

But for several months (more than 7 was the last I read of the issue), police acted 'dunno' and totally ignored her family's request for information as to who had shot her, even when lawyers and DAP Charles Santiago pressed the issue.

All the police said was that Pua was reportedly with a male companion who was driving an allegedly stolen Proton Waja, when the incident took place. According to police, the 31-year-old driver, who escaped without injuries and had five previous convictions, had earlier tried to ram his car into a police vehicle in an attempt to escape the law after a 15km chase.

Remember this kerbau, that the car the victim was in had tried to ram a police vehicle? Yes, it's the same BS (kerbau) as the one in the case of 14-year old Lim Hup Hwang who suffered head injuries.

And yesterday (02 Dec 2019) we have our dear trigger happy police shooting a 15-year-old boy, and hitting the poor kid on his shoulder, following a car chase in which police shot several time sat his car.

Now, hear this - the police reply to the unfortunate incident was that having intercepted the runaway car, a policeman got out of the patrol vehicle and approached the suspect's car. However the police claimed the suspect attempted to ram his car into the policeman - same story as the Lim Hup Kwang and Pua Bee Choo cases - thus the cop took out his gun and fired three shots at the wheel of the car.

You expect the public to believe that same old kerbau?


Strangely enough, or the policeman didn't have enough shooting practice, his low shots (at the car's wheels as he claimed) somehow rose up to hit the kid's shoulder. For more, read The Star Online's 15-yr-old boy shot after car chase with police.

Yes, our cops have done it again, shooting kids and a woman, and then coming up with a seeming SOP explanation, that the shot victims had attempted to ram them.

Really, what were/are STANDING ORDERS and RULES OF ENGAGEMENT for police in a situation where a car speed off when police attempt to stop it?

Wasn't/isn't opening fire in this situation an unjustifiable act, especially for a public force created to protect the public, including and especially naughty kids?

In fact, in the Aminulrasyid Azman case, Judge Datuk Ahmad Zaidi Ibrahim in his ruling said the police officer on duty, a Corporal, went against the Inspector-General’s Standing Orders (IGSO) when he opened fire during the incident.

So in the PDRM, there existed/exist STANDING ORDERS pertaining to the use of the deadly firearms and RULES of ENGAGEMENT. But those men in blue (as above cases) went against them.

But I fear there was/is an underlying streak of violence, arrogance, non-accountability and siapa-raja-ness in the PDRM, where opening fire in such low security situations seemed/seems to be normal.

The mata-mata out in the street have, through their leaders' examples, indoctrination, training (or lack of), come to believe in his/her unfettered authority and right to open fire when he/she deems a target is not appropriately obedient to his/her commands.

Eons ago in Penang, way before my time as my uncle told me, a police outrider in a VVIP convoy came upon a young boy pedalling a bicycle just ahead, but by the edge of the road where cyclists would be.

Without pausing as he passed, he brutally and callously kicked the young cyclist aside, obviously to show that no one should be moving on the road when a VVIP convoy was in progress.

Unfortunately the boy hit his head on something hard when he fell down, and died of fatal head injuries. Like Lim Hup Hwang, his head suffered severe head injuries when he fell after being kicked by a cop, but alas, for the boy mentioned now, he died.

As a youngster (coincidentally around 14 years old too) I suffered almost the same experience though fortunately for me, the policeman, also on a bicycle, came from behind me and kicked his booted foot right into the spokes of my front wheel (instead of me) to stop me.

Due to the unexpected abrupt stop (of my front wheel), I catapulted forward but luckily suffered only minor bruises. But worse for very poor me, my bicycle received extensive damage especially to the front wheel. I couldn't afford to repair it and for months I lost use of the bicycle which I used to pedal to school (and back). To add insult to injury, I was severely beaten by my mum for damaging the bike.

After my abrupt and shocking fall, I got up quite dazed and wondered what had happened? The cop snarled at me for riding double abreast with my mate.

Riding my bicycle double abreast with a mate? Did that deserve such a violent treatment? Then he gave me a ticket.

Coincidentally, he was the cop who sought lodging advice from my neighbour Pakcik Daud, on whom I wrote about in my post Makcik Puteh & Belangkas over at my other blog KTemoc Kongsamkok.

I told Pakcik Daud about that incident. During a following meeting, Pakcik Daud gently reminded the cop about his unacceptable ‘behaviour’ especially with people in our small section of the Ayer Itam kampung and then, best of all for me, urged him to 'settle' the ticket.

The asshole was embarrassed of course and attempted to kerbau his way out by laying the blame on my mate, claiming he (my mate) was arrogant and refused to stop.

But wakakaka, Pakcik Daud knew he came from behind two oblivious boys chatting away happily while riding abreast. Perhaps the cop wanted to show off his police credentials as allowing him that act of unnecessary brutality. Anyway, the cop somehow had my ticket cancelled, thanks to Pakcik Daud.

Some people just can’t handle power and misapply it, and for the ordinary rakyat, it's usually the police. ‘Tis the nature of the beast.

Little wonder the police have been and are scared of the IPCMC. 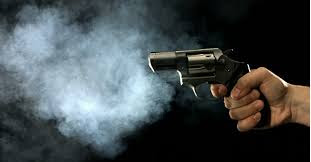