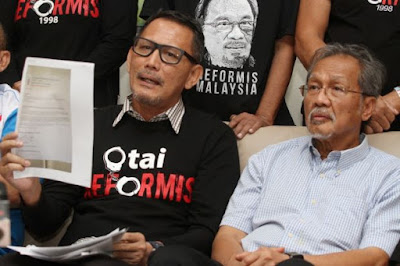 The Otai Reformasi movement has asked the Pakatan Harapan leadership to explain the two conflicting letters sent to the Selangor palace over the recommendation of the Mentri Besar post.

"We are saddened by the way the MB position was elected. We feel it is not fair towards Dr Idris. We are not satisfied at the way it was conducted," Abdul Razak said at a press conference in Dr Idris' house here on Thursday.

Pledging support for Dr Idris, he said the movement would serve as a check-and-balance on the governance of the Pakatan leadership.

Otai Reformasi is a non-governmental organisation that had once advocated for the release of PKR adviser Datuk Seri Anwar Ibrahim over his second sodomy charge.

Dr Idris is one of the advisers in the movement.

Earlier, Dr Idris said that his focus now was to clear his name over allegations he had misappropriated funds from the National Higher Education Fund Corporation (PTPTN).

Dr Idris said the allegations had not just affected his good name as an elected representative, but also as a specialist doctor.

He added that he is currently waiting for the police investigation to complete before deciding on his next course of action, adding that the police were investigating the case under Section 500 of the Penal Code for defamation.

Dr Idris also emphasised that he was not questioning the Selangor palace for electing Sungai Tua assemblyman Amirudin Shari as the new Mentri Besar.

The Selangor palace had said in a statement that it had received a letter from PKR president Datuk Seri Dr Wan Azizah Wan Ismail on June 7, which contained the names of three candidates.

The letter by Dr Wan Azizah had sought the palace to appoint any candidate deemed suitable as the Mentri Besar.

The June 7 letter had superseded the earlier letter sent to the palace.

"The letter indirectly cancelled out a previous letter written by the heads of Selangor political parties to the Sultan," said the statement.

The palace added that after a thorough review and obtaining the opinion of former mentri besar Datuk Seri Azmin Ali, His Highness chose Amirudin Shari, the Sungai Tua assemblyman as Azmin's successor.

Kaytee's note: I suspect that Wan Azizah's subsequently letter which claimed to supersede previous letters by the component parties supporting Dr Idris' candidature as the new state MB might have been issued in panic to "save her face" as Azmin Ali's recommendation was favoured by HRH.

I suspect she realised she had to go along with Azmin's choice, a fait accompli also stamped with royal approval.

She and hubby are now studiously disowning Dr Idris and whatever he said to the press, as if to show her first choice was not Dr Idris but rather, Amirudin Shari, Azmin's man.

Alas, such poor handling of a sensitive issue has undeniably laid the foundation of growing bitter resentment among PKR members, especially with the quite influential Otai Reformasi.