How can lah - ONLY ONE name for MB Selangor?

TMI - Azmin submits only one name for MB post to Selangor Palace (extracts): 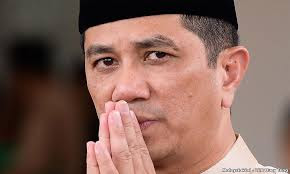 OUTGOING Selangor Menteri Besar Mohamed Azmin Ali has submitted the name of the successor for the position to the palace, according to media reports.

Azmin, who met Selangor Sultan Sharifuddin Idris Shah this morning, said the name was finalised after discussion with the PKR leadership.

“I have presented (the name of the candidate) to Tuanku after discussing the matter with the PKR leadership.

“I have also obtained the party’s consent to submit the candidate’s name to Tuanku. There is only one name and this is the final name,” Azmin told reporters as he left the palace at 11.57am today.

I recall Pakatan Rakyat (not yet Harapan) submitting ONE name to HRH in 2014 for the MB position. This was after Wan Azizah won teh Kajang by-election.

Then, HRH rejected that and demanded three names for him to consider. Many then said HRH in doing so (demanding three names) was being unconstitutional.

Years later (in 2017) HRH explained in a press interview with Malaysian Digest on his 72nd birthday celebrations why he did not approve Pakatan's nomination of Princess Iron Fan. HRH said

“I’ve said it before; the MB cannot be a puppet on a string, as the MB requires strong characteristics to seat at the helm”.

The report also reported: The Sultan went on to elaborate that he felt pressured as PKR insisted on only presenting him with one name, whilst in the past all ruling state governments have complied with the Sultan's request to propose several names.

“I’ve always asked for several names from the state government, and sometimes they’ve graced with up to three names and listed them according to preference."

“What is the problem in suggesting one more name for the seat?”

Will HRH feel pressured as Azmin Ali and PH have only presented him with one name, whilst in the past all ruling state governments have complied with HRH's request to propose several names?

Either Azmin is daringly defying HRH's wishes, or HRH has now decided to change his mind and to adopt a more constitutional mode?