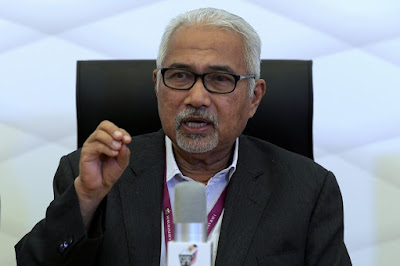 In a statement, the EC said the decision to cut short his services has received the assent of the Yang di-Pertuan Agong Sultan Muhammad V on June 7, with Prime Minister Tun Dr Mahathir Mohamad informed of this on Monday.

I am glad he will be gone. But we must use that opportunity of what is in actuality his expulsion to remedy the obscenity that has been the EC.

Let's see what Wikipedia tells us of the origin of the Malaysian EC:

The Election Commission (EC) was formed on 4 September 1957, under Article 114 of the Constitution of Malaysia, which empowers it to conduct elections for the Dewan Rakyat and state legislative bodies.

At its establishment, the EC only consisted of a chairman and two members – Datuk Dr Mustafa Albakri Hassan together with Lee Ewe Boon and Ditt Singh.

A secretariat was also set up to fulfil the commission's functions and carry out its decisions, with a secretary made the chief administrator. The first EC secretary was H. Cassidy.

After the formation of Malaysia in 1963 and the inclusion of Sabah and Sarawak, another member was added to represent the two states on a rotation basis. Datuk Abang Marzuki Nor from Sarawak was the first such member appointed.


An amendment to Article 114 made in 1981 provided for the new post of a deputy chairman, and Abdul Rahman Abdul Hassan was the first to hold this position.

Today, the EC has a chairman, a deputy chairman and five members, all appointed by the Yang di-Pertuan Agong after consulting the Conference of Rulers. [...]

Members of the Commission are appointed by the Yang di-Pertuan Agong (King), who must consult with the Conference of Rulers and appoint a Commission which has the confidence of the public.

One very important lesson we have learned since 1981 is NOT to allow the EC to be under the control of the PM.

Elections after elections since 1981 we have seen, though we could do fCk-all about, the EC's terrible gerrymandering and mischiefs.

There have been proposals to make the EC report and be accountable directly to parliament, but that will not make much difference to the commission reporting to the PM, especially if the winning party rules with a humongous majority and a powerful PM.

The Agong is by amended or mutilated laws helpless in the rule of a draconian strong-willed PM (I can straightaway think of one, wakakaka).

Thus I reckon that the EC should report to a strong and very independent body. The Senate in its present form is a pussy after its organisation was mutilated by you-know-who, wakakaka.

The intent of the original Constitution of Malaysia, which provided for only 16 Senators to be appointed by the King (thus placing them in the minority) was to give the states some say over federal policy.

However, subsequent amendments have, according to former Lord President of the Federal Court Tun Mohamed Suffian Mohamed Hashim, acted "contrary to the spirit of the original constitution which established the Dewan Negara specially as a body to protect in the federal Parliament, state interests against federal encroachments".

The original 16 senators to be appointed by the Agong to represent minority groups such as the aborigines, natives, other ethnic minorities, interest groups, etc were increased to 4O ad to be nominated by the PM.

Thus the 40 senators appointed on the recommendations of the PM can outvote the senators of the 13 states, which brought Tun Mohd Suffian Hashim to make his notable remark that the increase in numbers of PM-apppointed senators is "contrary to the spirit of the original constitution which established the Dewan Negara specially as a body to protect in the federal Parliament, state interests against federal encroachments".

I don't have to tell which PM altered the Constitution to fCk up kaukau that constitutional check and balance and the protection of state interests.

It will be unusual but I propose the EC reports directly to a truly powerful and independent Judiciary, which by the way is still NOT the case currently. But I so propose because it's easier to re-make the Judiciary into a truly independent body than to do so for federal parliament or the senate.

Besides, the EC Commissioner is treated as equivalent to a judge so let him or her be among judges and to report to the Chief Justice.

Secondly, we must let the new EC starts its true re-delineation exercise immediately once the above matter has been confirmed. This time hopefully, the re-delineation will observe the rule of "one person, one vote", and not the contrasting weightage of the Putrajaya constituency (27,000 voters) versus the Damansara constituency (164,000 voters). What a gerrymandering obscenity!

Although in GE14 there were 15 million registered voters, another 3 million eligible voters remain to be registered. If we allow for population increase by 2023 then there will be around 20 million potential voters.

Based on that against a manageable 80,000 voters per federal constituency per MP, we need 375 constituencies. Currently we have 222 thus an increase of another 153 constituencies will be necessary.

That's quite plausible because an over-bloated or sardine-ised constituency like Tony Pua's Damansara (formerly as Petaling Jaya Utara) currently has 164,322 registered voters. It can be easily turned into two federal constituencies if there is no prejudice by the EC against certain particular parties.

OTOH, the ridiculousness of a 27,000-voter-Putrajaya hardly merits being a federal constituency, nor is Labuan, the other FT. The job of the new EC is to ensure the principle-doctrine of "one person, one vote" is preserved as far as possible with the minimum of latitude.

Each and every complaint that had been voiced in the past against the EC such as defective voting rolls, manipulation of postal votes, and obscene gerrymandering as observed in Tony Pua's constituency must be addressed correctly.

However, I support the proper continuation of postal voting to ensure the military, emergency workers and policemen on duty on voting day will not be disenfranchised but such postal votes shall be rigorously accounted for.

But remember, the EC must never be allowed under the direct control of the PM. And the officials of the EC must reflect the multi-makeup of Malaysian society. Get BERSIH and other related NGOs involved as well.

Bloody fCk-ing start now and don't wait until the eve of GE15 to complain about the EC and its bag of tricks.