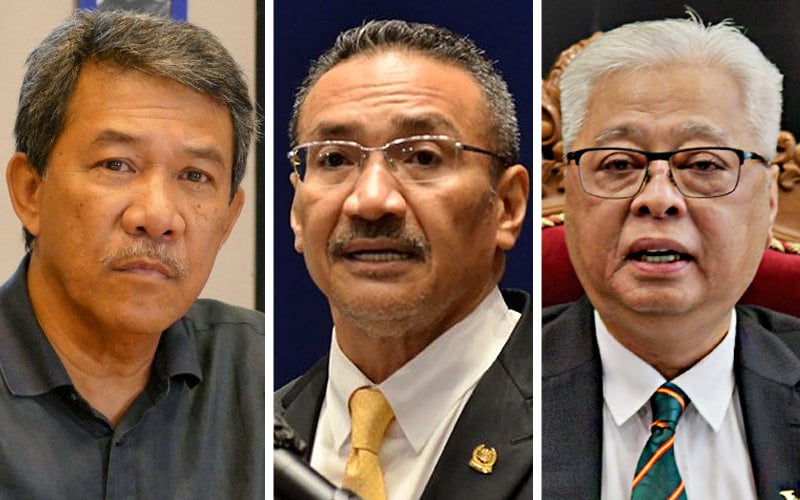 (From left) The contest for the top Umno post is now between Mohamad Hasan, Hishammuddin Hussein and Ismail Sabri Yaakob.

PETALING JAYA: An Umno grassroots leader has warned colleagues serving in the Cabinet that they risk being ostracised by their own party as Covid-19 takes its toll on the economy and people’s livelihoods.

“The anger is there for everyone to see,” he said. “Many Umno grassroots members are worried that the party will suffer from its association with the present administration.

“After the Umno general assembly, there were already calls for our ministers to quit the Cabinet but they stayed on.”

The leader, who ranks high in the Umno hierarchy, spoke to FMT on condition that his name is withheld.

He said the ministers should “at least go all out to fight for the right policies and measures” if they felt they had a duty to remain in the Cabinet because of the Covid-19 situation.

He said they were putting Umno at risk by ignoring calls coming from experts and “even Umno leaders” for a strict and short lockdown and for the reopening of Parliament and numerous other suggestions that could help the government address the pandemic effectively.

Umno leaders in the Cabinet should “reflect and start speaking up” if they harbour dreams of leadership positions ahead of the party polls, he added.

Three names are being bandied about for the contest for the Umno presidency in this year’s party polls. They are Umno deputy president Mohamad Hasan, foreign minister Hishammuddin Hussein and defence minister Ismail Sabri Yaakob.

“From what I gather,” said the source, “the Umno ministers do not stand a chance of winning top posts in the party. They might even end up as outcasts the way things are going.”

Former academic Azmi Hassan said both Hishammuddin and Ismail had failed to make full use of their positions in the Cabinet. They had not been vocal enough as potential “voices of reason”, he said.

Referring to Mohamad, he said the deputy president had “no problem going against the grain, speaking out when he has to”.

“This is why many in Umno and among the public see him in a very positive light,” he said.

“I don’t see it as being too late for Hishammudin and Ismail to show what they are made of, but this would require them to speak up because there is unhappiness about the government’s handling of Covid-19 and the economy.”

Padang Rengas MP Nazri Aziz, however, believes Hishammuddin should be given the chance to lead the party because of his experience both in the government and as a senior party leader.

“People say he disappeared after the last general election because he didn’t contest in party elections, but I don’t see it this way.”

Nazri said he believed Hishammuddin’s decision not to contest for a post was motivated by a wish to prevent a split in the party.

Referring to his own charge of cowardice against Umno members who did not quit the Cabinet after the party resolved to cut ties with Bersatu, he said this did not mean he thought Hishammuddin was unfit to lead the party.

“That criticism is not an indictment of his character,” he said.
Posted by KTemoc at 10:41 am