The 'Atuk-risation' of the Malaysian Police 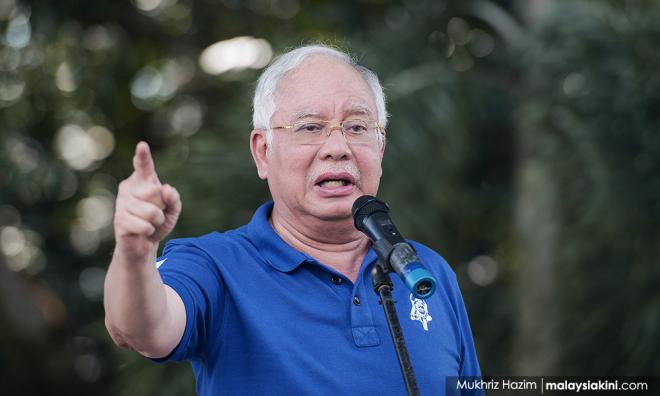 Najib: Cops acted swiftly on SOP violations, but not KTV session before 'rape'

Former prime minister Najib Abdul Razak accused the police of keeping mum on rape allegations against a Perikatan Nasional lawmaker but were swift to comment on other cases.

“When Najib failed to scan the MySejahtera (QR code), the police swiftly issued a statement. When Dr Mahathir Mohamad did the same, the police did so again.

“Because of that, I find it strange that the police has yet to issue any statements regarding the case involving a woman who alleged that a PN lawmaker who set up her rape,” said Najib on his Facebook page today.

Najib also pointed to alleged Covid-19 protocol violations in the incident based on the witness' claim.

“They were signing at a VIP KTV in a hotel until the wee hours although KTVs are not allowed to operate during the conditional movement control order (MCO) areas.

“However, there are no statements from the police. The lawmaker (that was implicated) has not offered comments either,” said Najib.

According to the victim’s police report on May 8, the alleged rape took place on Dec 5 at a hotel in Selangor, which was under conditional MCO restrictions at the time.

On Nov 22, the police had raided a karaoke centre in Kuala Lumpur and fined each patron RM1,000 while the proprietor was fined RM50,000.

On May 7, Najib was fined RM3,000 for failing to check his temperature and log his entry before dining at a chicken rice shop in Kuala Lumpur.

Mahathir was accused of a similar offence when he attended a function in Langkawi on May 8.

Najib said the police ought to keep the public updated on several hot button issues and not just issue statements on well-known people for Covid-19 protocol violations.

“A lot of people are asking if whether a rape accusation is not as important as a case of forgetting to scan (the QR code) with MySejahtera. Please update us.

“Please also update us on the case about a husband and children of a certain VVIP who was accused of receiving RM700 million from Jho Low. The last update was in early March,” said Najib.
***

Cops call up woman who claimed rape by assemblyman’s buddies Asheeq Ali Sethi Alivi and his client at the Brickfields police station on May 11.

PETALING JAYA: A woman who was allegedly raped by two friends of Gombak Setia assemblyman Hilman Idham last December has been called by police to give a statement on Wednesday.

The matter was confirmed by the victim’s lawyer, Asheeq Ali Sethi Alivi.

“Police have contacted my client to give a statement at the Kuala Lumpur contingent police headquarters this Wednesday,” he told FMT today.

The police action comes hours after Najib Razak had taken a jibe at the cops over the slow progress in the case, saying police were quick to issue a statement after it was reported that he forgot to scan the MySejahtera code when entering a chicken rice shop.

“But I’m puzzled why police have yet to issue any statement on the case of a woman making a police report alleging that the Perikatan Nasional (PN) assemblyman had planned her rape.

“Are rape cases not as important as cases of forgetting to scan MySejahtera?” the former prime minister asked in a Facebook post.

On May 9, Kuala Lumpur police chief Azmi Abu Kassim said the case was being investigated under Section 376 of the Penal Code for rape.

One of the persons implicated in the police report is a division leader of a component party of Perikatan Nasional, while the other is said to be an acquaintance of Hilman.