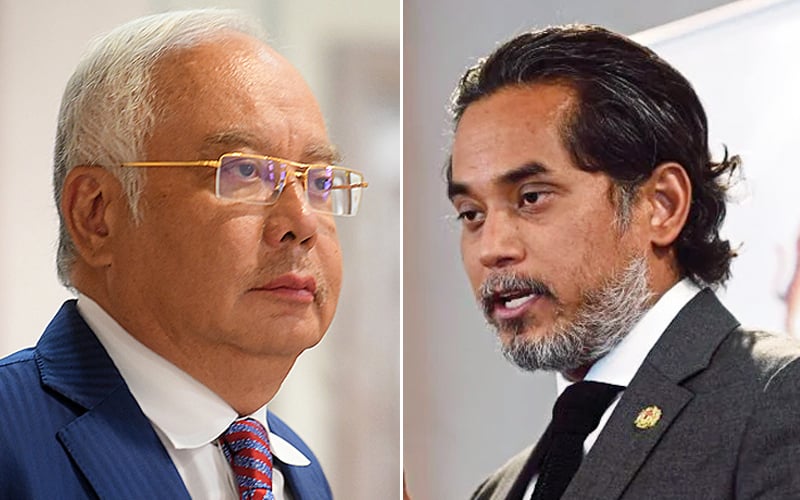 Najib Razak said Khairy Jamaluddin should not get angry when people question him on the low vaccination rate.

He said the rakyat has the right to question the low rate.

“This minister is very sensitive. He asks us to look at the future vaccination rate, not today’s.

Najib referred to how he had on March 18 pointed out the low rate of vaccination even though the programme started a month earlier.

“He (Khairy) then replied that our vaccination rates are higher than Singapore and other countries like Thailand, South Korea, the Philippines, Japan and Australia.

“But these countries are now doing better in their vaccination programme compared with Malaysia,” he said, adding that Khairy then called for people to wait for the third phase where 150,000 vaccine doses are targeted.

“But when the time for the third phase came in May, he now says they may not have enough doses as planned.”

He said Khairy was then further reported as saying that the vaccination rate, although low, should stabilise by June.

“But then he was reported again stating that mass Covid-19 vaccine supply may be delayed to July amid the worsening pandemic,” Najib said.

The Pekan MP reminded that the vaccination programme was crucial to achieve herd immunity and to reduce the number of deaths from Covid-19.

He also said the budget for vaccination had been increased from RM3 billion to RM5 billion with the funds taken from the National Trust Fund (KWAN).

“But he gets angry when people question him,” Najib said.
Posted by KTemoc at 6:54 pm