BAGAN SERAI: A man who appeared in a viral video clip worshipping at an altar while dressed as a lebai (pious Muslim man) was arrested here, yesterday.

The 43-year-old fisherman was detained after he surrendered himself at the Kerian district police headquarters’ Criminal Investigation Division here, at 5pm on Monday.

The man was being sought by police after a report was lodged by the Tanjung Piandang Mosque Committee over the 15-second video clip which went viral on social media platforms on June 7.

The footage, shot by an unknown individual, features the suspect – dressed in a sarong, white shirt (traditionally associated with lebai) and a Muslim skullcap holding incense sticks and worshipping before an outdoor ‘Dato Kong’ altar.

Several other individuals seen in the video, which is believed to have been shot in Taman Piandang Indah, laugh as the man kneels before the altar and waves the incense sticks.

One man off-camera is heard saying in Malay: “Today is Hari Raya”.

It is learnt than an investigation was immediately launched under Section 298A of the Penal Code – for causing disharmony, disunity, or feelings of enmity, hatred or ill will, or prejudicing the maintenance of harmony or unity, on grounds of religion – prior to the man surrendering himself.

Following his arrest, a raid on the man’s home yielded no evidence.

“No articles were seized, because the clothes worn by the man in the viral video had either been removed or disposed of by unknown individuals,” Kerian police chief Superintendent Omar Bakhtiar said in a statement last night.

He added that police will obtain a remand order from the Parit Buntar Court today; and that a new investigation on the case is being conducted under Section 233 of the Communications and Multimedia Act 1998 for improper use of network facilities or network services.

This has been a very very serious matter, well, at least in Peninsular Malaysia it would be.

It's so serious that police will launch a new investigation on the matter.

When I first saw the news article some days ago, I knew what would come and what would be the consequences for the poor bloke.

But all things considered, the chappie will still be comparatively fortunate because Malaysia hasn't come to a stage when it allows capital punishment by the Islamic court.

But if we aren't careful, that day will come. 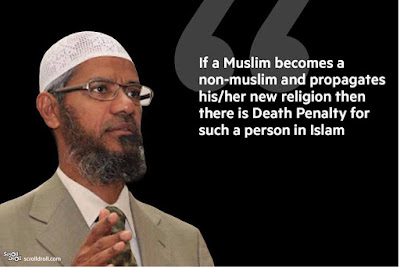