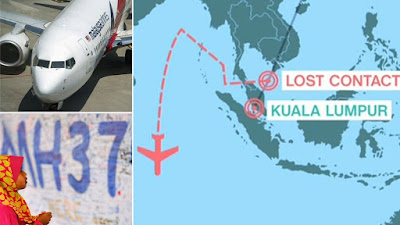 Hishammuddin, who was picked as the government spokesman in the aftermath of one of the aviation industry's biggest mysteries, also called on the masses to not pay heed to Langewiesche's claims, which he labelled as a mere attempt at capitalising on the issue, adding that the authorities can easily debunk the former's allegations.

“Old news by someone who wants to capitalise on it . We should not give mileage to him .

“Not sure what his motives are, but the authorities can easily prove him wrong. You should contact them,” Hishammuddin told Malay Mail when contacted.

In a very long article for US magazine The Atlantic’s July issue that was published online on Monday, Langewiesche — who has been described as among the most authoritative and respected aviation writers — also took aim at Malaysian officials past and present for the continued mystery surrounding the Malaysian Airlines flight.

In his article titled “What Really Happened to Malaysia’s Missing Airplane”, Langewiesche alleged that the Malaysian authorities’ ineptitude continues to the present day under the Pakatan Harapan administration, even accusing Transport Minister Anthony Loke of now culpability in why the plane has not been found and flubbing protocol during an event related to MH370 last year, without going into the details.

Langewiesche’s article though likely of interest to the amateur sleuths takes over familiar ground but does not throw up any new information, which was noted by another writer Clive Irving of US news and opinion website on popular culture, Daily Beast.

In his Daily Beast article published yesterday, Irving pointed out the “unfortunate tone of condescension” in Langewiesche’s musings on Zaharie’s mental state leading up the disappearance of the plane, as well as his fellow US peer’s flair for dramatics over true descriptions, especially in the latter’s retelling of the end.


I read through William Langewiesche's article in Atlantic magazine but found nothing worthwhile, and I am also in agreement with Clive Irving (Daily Beast) about the “unfortunate tone of condescension” in Langewiesche’s musings on Zaharie’s mental state leading up the disappearance of the plane, as well as the dramatics over true descriptions, especially in the retelling of the end.

His (Langewiesche's) speculated rendition of MH370 shattering into bits and pieces like metal confetti might possibly find sympathy with Lim Kit Siang who once posted another BS speculation of MH370 flipping upside down in the plane's final moment of landing on the ocean - I'll leave this dark side of Lim KS out of this post and save it for another day, another posting where I'll show Lim KS' unpleasant mindset, wakakaka.

The article tells tales with "no-name name-dropping", wakakaka, intimidating chit-chats with Captain Azaharie's B777 colleagues but who couldn't be named - Podah. I too can write pseudo-authoritatively like so.

Captain Azaharie's so-called tale-telling simulator at the late pilot's home, which Langewiesche harped upon, was crated up by police and shipped off to Langewiesche homeland in the USA, to the US FAA (or/and NTSB or/and FBI) for investigations immediately after MH370 went missing.

The search for MH370 was conducted mainly by Australian authorities and had assistance from the British Air Accidents Investigation Branch, INMARSAT, Boeing, etc and investigated thoroughly by the ATSB (Australian Transport Safety Board), a national level investigation unit of near-impeccable credentials, experience and competency.

In comparison with the American NTSB, FBI, FAA and Australian ATSB and various supportive authorities and companies, who the eff is William Langewiesche other than an aviation author in 'carma' mode (cari makan in peddling his article).

There is also another factor, particularly in the non-government aviation sector in USA and its clone-clientele, Australia, where there exists conspiracy theories usually associated (adversely) with 'Asian' or non-Western aviation bodies.

For example, Asians have been depicted (actually in a PhD-originated book, wakakaka)  as kowtowing obediently to their seniors and not having the guts or balls (not Asian culture) to inform their superiors, say, aircraft captains of wrong-doings.

OTOH, European or American co-pilots are depicted as suffering from 'a very steep cockpit authoritative gradient'.

It's EXACTLY the same as Asian copilots 'kowtowing obediently to their seniors and not having the guts or balls (not Asian culture) to inform their superiors, say, aircraft captains of wrong-doings', wakakaka.

Asians don't have the culture and balls to speak up of wrongs to their seniors whilst Caucasians only suffer from 'very steep cockpit authoritative gradient' and thus remain silent in the face of wrong-doings by their seniors, wakakaka.

Then there was the British captain who would 'brook no cheeky arguments or differing viewpoints from a junior copilot', the result of which had been attributed to the crash of his aircraft. What's the difference?

Such has been the hypocrisy in the Western World of aviation.

One more factor to stir the balls of Americans (and Australians) like William Langewiesche in 3 terms, namely:

They go wild with all sorts of conspiracies. In MH370 (a) and (c) could be said to be proven, whilst (b) could also be determined by some prejudiced accusations-allegations against Captain Azaharie, but with lots of "no-name name-dropping", wakakaka.

Hishammuddin Hussein has been absolutely correct in saying: “Old news by someone who wants to capitalise on it . We should not give mileage to him."

“Not sure what his motives are, but the authorities can easily prove him wrong. You should contact them.”

And those 'authorities' which Hisham mentioned are all Western aviation authorities in the USA, Australia and Britain.

next time I'll regale you and William Langewiesche with PM Mahathir's theory of what happened to MH370, wakakaka. I can assure you it's far more interesting that Langewiesche carma BS.