An emotional teacher, a rude student and a now-quiet-as-mouse Dep Edu Minister


BUKIT MERTAJAM: Deputy Education Minister Teo Nie Ching today urged teachers going through emotional stress at work to seek counselling rather than to take it out on their students, following news that a teacher had caned a student at a school in Johor for calling him “ah kua” or effeminate.
“Being an educator is not an easy task. In the ministry, we remind all educators and students that schools are a place to inculcate love and mutual respect for one another.
“This issue shows that our educators are facing trouble controlling their emotions. We are ready to provide counselling for teachers with emotional problems,” Teo said.
She said the national syllabus on sex education would help counter name-calling and discrimination against those who do not fall under certain gender types.
She added that the district education office in Johor is investigating the caning case, with assistance from a school representative and the student’s parent.
A police investigation is also underway, she said, with a full report on the matter to be released to the ministry later today.
Teo said the ministry has had clear guidelines on caning and corporal punishment since 2003. According to the guidelines, girls should be spared the cane.
She said only male students who commit an offence of “medium” or “high” level are subject to caning on the palm and on the buttocks with clothing on.
Teo said the 2003 circular also states that only a principal or a teacher nominated by the principal can carry out the caning. She said the caning should not take place in full view of other students in a class or an assembly.
According to the education ministry’s circular No 7/2003, there are 35 major offences, 10 medium offences and 27 light offences. Caning can be carried out on those who commit major and medium offences.
Some of the major offences listed are drug use, smoking, alcohol consumption and being rude to teachers, while medium offences include colouring hair, having skinhead or punk hairstyles, or leaving the school without permission.
Major offences are to be punished with a maximum of three strokes of the cane on the buttocks, while medium offences are to be punished with three strokes of the cane on the palm.
For light offences, warnings and counselling are given.
********
Both sides are to be blamed.
The teacher shouldn't lose his temper and lash out at the naughty biadab-ish student, like Shintaro Katsu or my late mum (wakakaka) who was my personal 'Zatoichi', wakakaka again. If a person wants to be a teacher, he'/she needs to behave in a manner benefiting the students, and most important of all, doesn't allow personal emotions (anger, dislikes, etc) overrule his/her judgement.

Once I had a nasty teacher who disliked me for no other reason than I was/am Chinese - no, he was not a Malay, wakakaka. 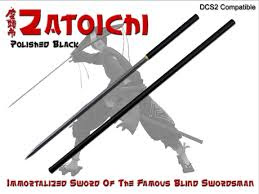 But I appreciate the Johor teacher currently in question must have been extremely angry to whip-lash the student so severely. Being biadab-ishly called 'effeminate' is a very hurting insult, especially when that came from a student.
And students, especially from secondary schools should be more discipline and well-mannered - don't call your teachers 'Ah Qua' - that's rude, biadab and reflect badly on your parents for not teaching you better manners. I personally would like to see you caned but alas, not by the teacher but by your own parents.
Posted by KTemoc at 7:19 pm