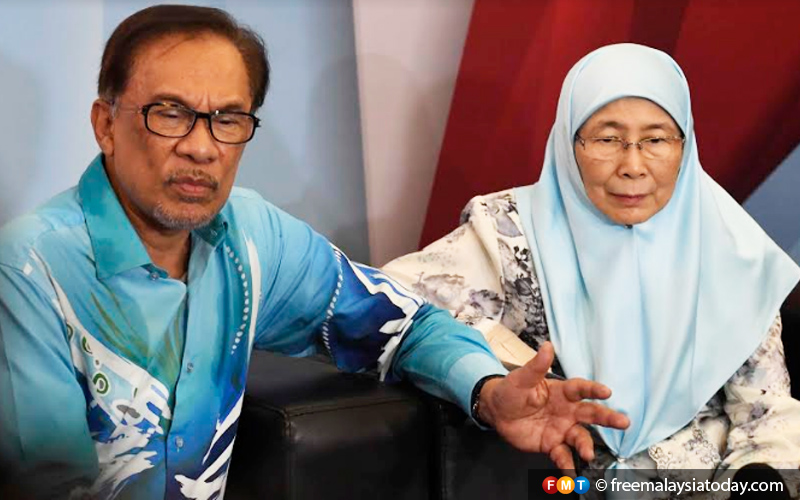 Given the way Dr Mahathir Mohamad is playing games over the exact moment when Anwar Ibrahim is to take over as prime minister, I would call upon Dr Wan Azizah Wan Ismail to make a strategic chess move by resigning as the deputy prime minister as soon as possible since she has already said she would do so if her husband becomes the PM and she does not condone nepotism in her party.
Now, before any feminist jumps down on my throat, let me declare that I was the only consistent defender of Wan Azizah ’s right to keep her Permatang Pauh parliamentary seat in 2008 when practically all in the then Pakatan coalition felt that she had to resign her seat to make way for her husband.
At the time, I said that either the chief minister of Penang or the menteri besar of Selangor could have relinquished their seats for Anwar since they already had enough on their plates in looking after their own respective states without hogging federal constituencies as well.
No feminists at that time raised any objections even though Wan Azizah was already an elected MP in her own right.
From the first time that she entered the political arena as the candidate for the parliamentary seat of Permatang Pauh, after her husband’s incarceration, Wan Azizah has been treated as the seat-warmer for Anwar.
Again, during the hare-brained “Kajang Move” in 2014, Wan Azizah was supposed to be the “interim menteri besar” for Selangor except that the plans went awry and Mohamed Azmin Ali ended up as the menteri besar instead.
The consequences of this ill-thought-out political scheme had even more serious consequences for the then Pakatan Rakyat coalition when PAS was ejected from the coalition.
During the so-called Kajang Move, “feminist” arguments were suddenly proffered to justify Wan Azizah being the “interim menteri besar of Selangor” when it was evident that the choice of Wan Azizah or Azmin was a bone of contention among DAP, PKR and PAS.
Concerned Malaysians should note that this was the real cause of the ejection of PAS from the opposition coalition and not the hudud issue as it is often made out to be. After all, hudud has been part and parcel of PAS’ ideology since the Islamic party started decades ago.
Fast forward to GE14 and the surprise victory for Pakatan Harapan with the following results: PKR 49, DAP 42, PPBM 12, Amanah 10. BN garnered 79 seats, with PAS getting 18 seats.
Granted the PH coalition parties were grateful to Mahathir for helping achieve the victory, but I found it bemusing that Wan Azizah, as the leader of the PH party with the most seats, should once again be the “eternal interim whatever”.
The PH leaders had apparently agreed that Mahathir would be the PM-designate even though his race-based party had only won 12 seats! No doubt there was some horse trading to ensure certain outcomes which have since come to pass.
Why were PH leaders so desperate to have the old PM as a second-term PM? Didn’t the Malaysian people vote for change? What was wrong with having Wan Azizah as the PM? After all, Mahathir’s party had won only 12 seats and PH was not a registered coalition. Thus, what was so intimidating about the role to deter Wan Azizah from becoming the interim PM?
My statement on May 10, 2018, asked: “Why can’t Dr Wan Azizah be our first woman PM?”
Now all that is academic. Now, we have a Mahathir-led “new” government with the same old economic, social and education policies that mirror those of his first term as PM and although he and Anwar had apparently agreed to a succession plan, we witness a guessing game that keeps Anwar and the nation in suspense.
Apart from the uncertainty facing the country during this time of economic turmoil, it must be sickening for Anwar’s family to watch the old man’s Machiavellian moves.
The time is therefore opportune for Wan Azizah to vacate her deputy prime minister’s post for Anwar as a precursor to his taking over the PM post from Mahathir in one year’s time.
After all, Anwar needs a little bit of time to get back into the role of deputy prime minister after his two decades in Mahathir’s prison.
Posted by KTemoc at 2:28 pm