The Kotor-ness in the investigation into Teoh beng Hock's death


Police said today they are just following orders from the Attorney-General's Chambers on re-investigating Teoh Beng Hock's death under Section 342 of the Penal Code, which deals with wrongful confinement.

Asked to comment on the reclassification of the police investigation, Deputy Inspector-General of Police Mazlan Mansor said police couldn't comment further as to why the re-investigation was not being carried out under Section 304, which covers culpable homicide.

"I can't comment on what the prosecutor's side has decided. We are conducting our investigation based on what has been decided by them," Mazlan (below) told the media in Kuala Lumpur.

Yesterday, Teoh Beng Hock Trust For Democracy chairperson Ng Geok Chee revealed that police have reopened their investigation into the political aide's death under Section 342. A new probe into Teoh's controversial death was one of Pakatan Harapan's pledges in its GE14 manifesto.

Ng had said a probe under Section 342 would go against the findings of the Court of Appeal in 2014, which ruled that one or more unknown persons, including MACC officers, had caused the death of Teoh when he was in their custody.

"This is in stark contrast to the recommendations of the Teoh Beng Hock Trust for Democracy and Malaysian Bar that the MACC officers involved should be prosecuted under Section 304 (of the Penal Code) for culpable homicide and that upon conviction, the perpetrators will serve a jail term of up to 30 years and a fine. 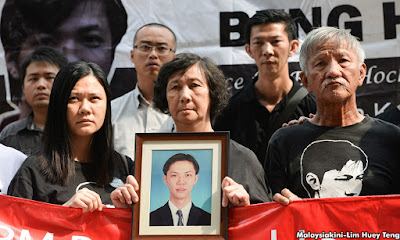 Firstly, it's true the police follows the direction of the AGC, Tommy Thomas' Chambers.

In 2014, the Court of Appeal ruled that one or more unknown persons, including MACC officers, had caused the death of Teoh Beng Hock (TBH) when he was in their custody.

Whoever was involved in TBH's death, even and especially if it included MACC officer(s), is/are to be investigated, charged and prosecuted under Section 304 (of the Penal Code) for culpable homicide.

Instead, today we see the AGC instructing police to investigate the TBH's saga under Section 342 (and NOT Section 304) of the Penal Code, which deals with wrongful confinement (and not culpable homicide).

Even Muhyiddin (Home Affairs Minister) has washed his hands from the affair a la Pontius Pilate by saying (as reported in FMT) We’ve exhausted all legal processes in Beng Hock case, so the Ministry has passed the matter to the AGC to resolve.

And most deafening of all has been the eff-ing silence from Lim Kit Siang who seemingly has abandoned TBH to his fate.

Tell me, who has "instructed" the AGC to main kotor and deceitfully change the section of the Penal Code in  probing the TBH tragedy?