WTF is the police doing, in obeying and protecting an Indian fugitive?

Yoursay: Who calls the shots - our elected reps or Zakir Naik? 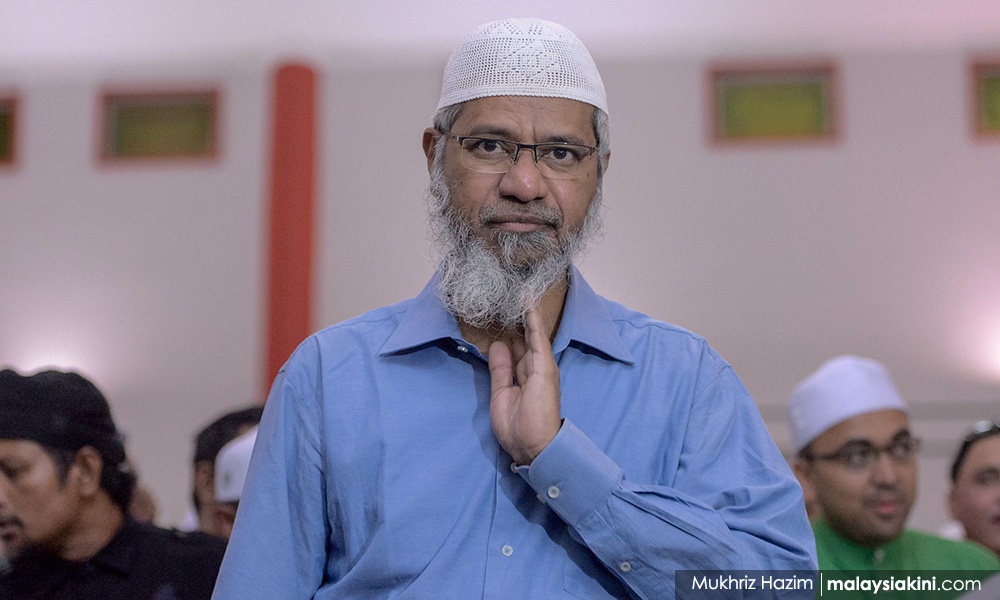 YOURSAY | ‘The police should have better sense than to harass ministers in His Majesty's gov’t…’
Five named in Zakir Naik's police report to be called up next week
Kee Thuan Chye: Defamation is not a matter for the police to be involved in, is it? It is for the plaintiff to take out a civil suit against those alleged to have defamed him.
It is strange that the police should investigate the alleged offenders based on the complaint of a ‘guest’ of this country. Surely, even the prime minister should not enjoy that privilege, right?
Newday: How can expressing an opinion about a highly controversial speech become fodder for a police report?
Muslim preacher Dr Zakir Naik can pursue his stupid and wasteful defamation case as much as he likes, but that is where it stops.
Come on, police officers. Once and for all, show some balls and state clearly – “There is no case to pursue and don't waste our time with vexatious police reports.”
Orang Biasa: Human Resources Minister M Kulasegaran, Penang Deputy Chief Minister II P Ramasamy and Klang MP Charles Santiago are all politicians.
They only expressed opinions. Not stated facts. The contents of Zakir’s statement in Kelantan was by itself seditious. Only that statement need be proved. The investigating officer must be independent.
Clever Voter: Perhaps someone should remind them that all of those politicians who were ‘invited’ to make statements are politicians with direct interest in affairs of the country.
Zakir is not, and honestly the police should have just arrested him and put him on the plane. Once again, we see no end to the political game.
Wira: The police should have better sense than to harass ministers in His Majesty's government just because of a frivolous police report by a foreigner instigating racism in our country.
Would the prime minister be called up because of a similarly frivolous police report?
Quigonbond: This is only happening because Prime Minister Dr Mahathir Mohamad allows it.
Imagine in the days of BN for a minister to be hauled up by the police. It fits into a pattern of trying to wither down support for moderate politicians.
Mahathir does not want a middle Malaysia. He is showing the middle finger to moderate Malaysia.
For him, it is whatever it takes to put Bersatu (and perhaps his son) in pole position, including being in bed with Umno, PAS and PKR deputy president Mohamed Azmin Ali.
CK Tay: Clearly, something is not quite right. Zakir's case against our elected peoples' representatives is not a criminal case, why should the police call them to make statements?
They should not be inconvenient as they have important things to do. The police should instead put in more effort in pressing charges against this fugitive for creating racial disharmony rather than entertaining him.
If we were to make a police report against him for preaching hate and belittling other religions, will the police call him up to take his statement for each of the cases?
Bluemountains: In the land of endless possibilities, a fugitive can summon the police to call up Malaysians who are alleged to have defamed him.
Indeed, since when has matters concerning defamation become a concern for the police? Defamation is a private matter.
Dizzer: What I don't get about our 'police report system' is why the 'accused' have to report themselves to a police station to be questioned.
What a massive inconvenience, especially for ministers who one would think have better things to do than take a day off work to be quizzed about the spurious allegations of whichever bigot (invariably a racist or religious group) happens to have his (invariably) knickers in a twist over some perceived slight.
Anonymous 2443871479002035: As a visitor, I am shocked to read that the prime minister is giving shelter to a wanted man and a fugitive from India, a friendly brother Commonwealth country.
What shocks me even more is that he is being treated like a VIP. That's adding insult to injury.
You rather shelter him than send him to India where he is a wanted for money laundering? Come on, Malaysia. This is not the way to go.
Rick Teo: The police should let the public know the outcome of its investigation on Zakir. After a supposedly 10-hour interrogation, nothing seems to come out of it.
Instead, now they are going after those people who wrote about this radical preacher spewing seditious statements against other religions and causing tension among the races.
TehTarik: Malaysia is gradually becoming a haven for intolerant Islamists whose main goal is to replace our constitutional democracy with a shariah/hudud-inspired Islamic state.
The process is akin to boiling a frog in hot water; a point is reached when the frog explodes and loses its life.
The Islamisation momentum cannot be stopped and will become even more evident when the non-Muslim population reaches less than 20 percent in 10 to 20 years’ time.
Almost all mainstream Muslim-based parties are joining the bandwagon. They do not have the guts to stop the spread of this intolerance and extremism. Unfortunately, the middle ground of tolerant Malays is either scared or too indifferent to speak up.
The message to the Chinese, Indians and liberal Malays is to not put all your eggs in one basket. Consider emigration or equip your children with globally needed skills before it is too late.
Cogito Ergo Sum: In the old days, the police will make an appointment to meet ministers.
But today, under Pakatan Harapan, ministers are summoned to come forward on a whimsical police report by a known bigot. Harapan, you deserve all this.
Aden Han: A wanted man from a foreign country, a fugitive technically, can mobilise our police force to question our lawmakers?
Every day is a new low in New Malaysia.
Posted by KTemoc at 12:01 pm