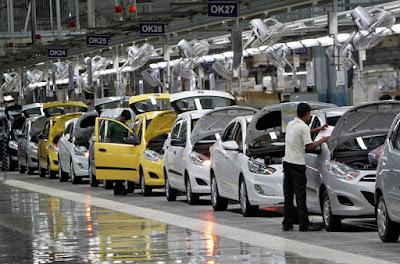 A year ago, India displaced Germany to become the world’s fourth biggest car market, having clocked up annual sales growth above 7 per cent for several years.

But the promising growth ride is screeching to a halt, with passenger car sales tumbling this year, including a 41 per cent drop last month — the worst since records began more than 20 years ago.

Aside from passenger cars, sales of commercial vehicles, motorcycles and scooters have also been hammered.

With the industry — a major employer in India — contributing more than 7 per cent to total GDP and almost half of manufacturing GDP, the potential fallout from an extended slowdown is sending shockwaves through the economy.

Manufacturers are reducing production and cutting jobs, which is also affecting related industries such as auto component manufacturing and at dealerships, totalling about 7 per cent of India’s total workforce, Bendre said.

“The entire ecosystem is huge — around 20 per cent of the population could be dependent on the auto sector,” he added.

With a population of 1.3 billion people, India is the world’s fourth-largest car market and one where owning a vehicle is as much a status symbol as a means of transport.

But the country’s once-booming auto sector — seen as an important barometer of overall economic health — is in the slow lane, with sales slumping for the 10th-straight month in August.

“The minimum (priced) car that you can get nowadays starts from six to seven lakhs (US$8,500 - US$9,800),” university student Somya Saluja told AFP.

“So it’s much easier to pool-in rather than to buy a new car.”

India has the population size that Mahathir dreams of, once even ridiculously asking Malaysians to bonk themselves into becoming a 70-million population.

With automobile giant like India facing huge slowdown and another giant China looming around, whilst traditional auto-makers like Japan, South Korea and European nations (France, Germany, Sweden, Italy, etc) have been setting the pace, style and trend for the world, Mahathir is still fantasising about his Car No 3 and the 4,000 parts of an automobile he reckons can propel Malaysian technology into stardom.

And Finance Minister Lim GE has still refused to explain where and which public monies has been illegally (well, against Pakatan manifesto and his own Guan-Eng words) used to finance DreamEDGE in the development of Mahathir's stupid Car No 3?