No, Mahathir, your response to racial politics not enough 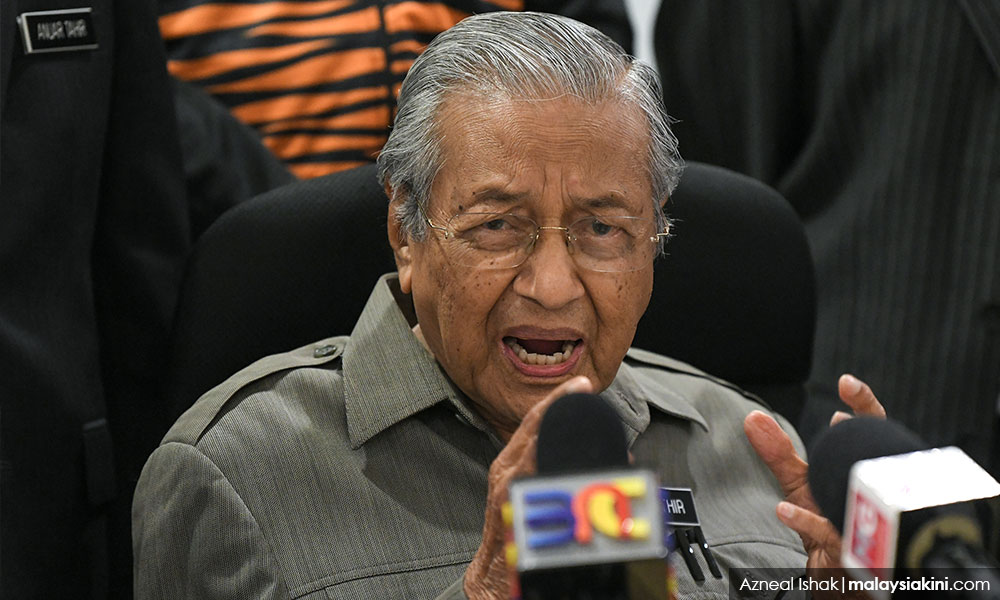 COMMENT | I recently posted a video ranting about what I thought of the Umno-PAS pact that was signed at the Putra World Trade Centre in Kuala Lumpur about a week ago. You can watch my rant in detail here but in a nutshell, I basically think that the converging of two ultra Malay political parties has a lot of racist undertones.
A ‘friend’ on social media commented that I should just let these parties be because all they want to do is unite the Malays and are not bothering anybody else. Of course, I had a lot to say in return to her comments. We all know how much hate speech Umno and PAS make when it comes to the state of how Malaysia is governed.
I don’t have to explain much about this because we already see so much proof of this all around us and in the media. And this is exactly what I said to my ‘friend’. In fact, as a journalist, I have also witnessed the racism that is spewed by Umno and PAS because I have been to their ceramah, events and press conferences.
My friend goes on to argue that I am also believing all the lies that DAP is spreading about Umno and PAS and hence, implying that I shouldn’t be accusing Umno and PAS of being racist. Right! So, I already knew where this argument would be heading if I continued to engage this ‘friend’ of mine.
So I stopped, but not before expressing how frustrated I am about the situation in Malaysia and how every time I feel like we are getting closer to reconciliation, something happens to push it far back again. I used to think that I would never see a united Malaysia in my lifetime. Then the May 9 general election happened and I feel like I might. But today, I feel like I might not again.
When Prime Minister Dr Mahathir Mohamad spoke recently in an in-depth interview on business radio station BFM, I paid particular attention to the parts where he addresses the racial politics and racism in Malaysia. One reason why I voted for Pakatan Harapan was so that it can put a stop to all this racist nonsense and I believe that its leaders should be firm and not tolerate it.
Mahathir says he is against racism. He explains that if everyone forgets their origin and see themselves as Malaysians, then racial politics would not happen. And as long as we don’t see ourselves as Malaysians first, then the politicians will always harp on this aspect because if they want to be elected, they will have to take into consideration the feelings of the people.
This sounds like pandering to me. Mahathir also explains that he can be anti-Malay but that would mean that he will not win elections and when he doesn’t win elections, he would not be in any position to do anything at all. So, this is the best for now, and this, to me, seems to be him justifying his pandering.


Look, I’m glad that our prime minister voices out on racism, but I think that whatever he is doing is not enough. First of all, he formed a political party that is race-based. Bersatu is a bumiputera party and even though it is part of the Pakatan Harapan coalition, its own manifesto is still based on racial politics. So, if the core is already based on race, then how, lah?
Don’t forget, we also already have racist policies in effect in government that favour the bumiputera so much. Of course, we understand that these policies were initially put in place to create an equal Malaysia. But we also understand that this was more than 60 years ago. Do we still need them?
I would say we don’t. But I’m not a seasoned politician, so I guess my thoughts don’t count for anything. Basically, the justification is that Malaysia is not ready yet to go so drastic as to be completely equal and fair. If we were to drastically make changes, then it would be dangerous because a lot of people might be dissatisfied.
Okay, then how long more do we have to wait? It has already been many decades that we have been harping on about all of this. The fact that there are still people like my ‘friend’ is because the politicians continue to play the racial game. When I say politicians, I mean politicians from both sides of the divide.
We expect nothing less of those from Umno and PAS. However, we also see Harapan leaders playing that game when issues like Zakir Naik, khat and Jawi in schools and the education quota system come up in discussions. So, maybe, someone has to buck up and stop it right now.
Who should do that? The people whom we promised that Malaysia is supposed to be for all. I’m sick and tired of the excuse that Malaysia and Malaysians are not ready yet because we will never be ready if we won’t even take the first few steps in that direction.


So, buck up Mahathir and gang. Making statements and talking to appease the people in order to win votes is only pandering for the short term. Walking the talk is what we really want from all of you. Take steps to stop racial politics. Change your systems. Change the current policies that are racist. That’s all it takes.
If you don’t get the votes to stay in power after that, then at least you know you did what was right. As for Malaysia, leave it to the people to then figure it out and decide when that time comes. You may think that you need to win the elections to stay in power. But you are all politicians and that’s how you think.
What we think is different. We are Malaysians and we don’t really have you in mind. We are not politicians and that means what we do have in mind is Malaysia as a country and us as a society. So, we know that Malaysia is bigger than all of us and definitely bigger than politicians. So, no sir, your answer to racial politics is not enough at the moment.
ZAN AZLEE is a writer, documentary film-maker, journalist and academic. He had waited so long for a change in the system and he is not willing to settle for a half-past-six change. Visit fatbidin.com to view his work.
Posted by KTemoc at 6:16 am