KUALA LUMPUR: Minister in the Prime Minister’s Department Mujahid Yusof Rawa has declared every Friday a “Use Jawi Writing Day” in an effort to encourage the use of the script.

He said Jawi is a national heritage which was once an official medium of communication between nations.

“With this spirit, we will retain our tradition and culture which I repeat should be supported by all races, as Jawi does not belong to the Malays. It is our Malaysian heritage,” he said in a statement.

Earlier, he launched the Popularise Jawi Writing programme by his ministry, which involves the heads of ministry agencies as well as government religious bodies wearing name tags in Jawi every Friday.

“I do not consider Jawi writing a process of Islamisation as alleged by some parties even though it is close to the administration of Islam.

“Jawi writing has become almost completely absent at the official usage level as only the Islamic administration has retained its usage to preserve Jawi writing,” he said.

Firstly, no one said that learning Jawi is being Islamised. T'was only Khat lessons that was accused of stealthy sinister surreptitious Islamisation. Then what's the difference between Jawi and Khat?

From what I understand after reading recent news reports, Jawi is Bahasa Melayu in its unique Malay script derived from Arabic script. But Khat is Islamic calligraphy in Arabic and NOT written Bahasa Melayu.

Admittedly, many conservative Muslims in Malaysia don't distinguish any difference between the two scripts, but a few do, and so do non-Muslims. 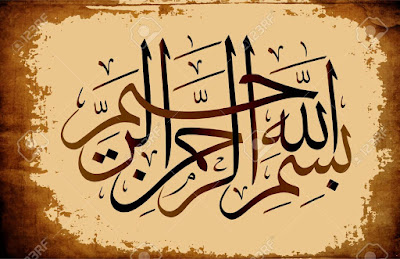 Secondly, I support the Minister in promoting Jawi as I am a Jawi student and enthusiast - see my post Nice Kind of JAWI written about 13 years ago. Yes, I would willingly learn Jawi as it's Bahasa Melayu (or Malaysia) but I see no necessity to learn Khat, more so when I can't read, speak nor understand Arabic.

But why limit “Use Jawi Writing Day” and Jawi-scripted name tags to only Fridays - use it everyday lah, at least the name tags. As for those Civil Service Malays (+90% of the MCS) who can't read Jawi - well, get your 6 o'clock moving Bruthers, wakakaka.

This "use on such-&-such day" practice reminds me of a story told by one of my uncles, most of whom were in the military and police.

Once there was a Chief of the Armed Forces Staff - they then called him by that title, but today he would have been titled 'Panglima Angkatan Tentera', the man in charge of all three services, the Army, Navy and Air Force.

Those were the days before our Armed Forces followed the Indonesian style of titling their Commanders (at least of one star) as 'Panglima'. They were then known as 'Ketua' this & that, eg. Ketua Turus Tentera Laut or Ketua Turus Tentera Udara. Turus was then translated directly from the English word 'Staff'.

There's a story of 'Command & Control' behind the change from (eg) Ketua Turus (Chief of Staff eg Chief of General Staff (head of the army), or Chief of Naval Staff ...) to 'Panglima' (Commander as in eg. Panglima Tentera or Commander of the Army), but those wearing the new titles today would rather the public not know about them, wakakaka - perhaps not in this post.

Anyway, this then-Chief of the Armed Forces Staff decreed that on such-&-such a day each and every week, the uniformed staff of the Ministry of Defence (Mindef) (yes, there were/are non-uniformed staff/civilians in the Ministry as well) must wear camouflage uniform called celoreng, and that included military visitors (Army, Navy & Air Force) to Mindef.

The purpose? It was supposedly a measure to add combative spirit to the desk bound jockeys, wakakaka.

Although the CAFS' (Chief of Armed Forces Staff) directive on uniforms was circulated throughout the entire Malaysian armed forces, only the Mindef staff could maintain awareness of it over time because of their day to day activities over the weeks working at Mindef. They would have been in trouble if they didn't wear celoreng on the stipulated day of the week.

But it was different in the boondocks* because with time, soon that order became blur and forgotten by military personnel there.

* Boondocks means 'a remote rural area' which we Malaysians like to refer to as 'ulu' (interior of a country or rural area).

It is actually of Filipino (Tagalog) origin from its word of 'bundok' meaning 'mountain'.

The Yanks who colonised Philippines from 1898 to 1946 after defeating the earlier coloniser Spain in the Spanish-American War, had acquired the archipelago from Spanish ceding, and also adopted the Tagalog word into its vocabulary to mean 'the sticks, the dumps', or as the Aussies would say 'the bush'.

The boondocks of the military were in the remote locations of East Malaysia, eg. Tawau, Sandakan, Sibu, Bario, even Labuan, etc.

So when a navy commander from Tawau, or an army captain from Sibu, or an air force sergeant from Labuan was called to Mindef to attend a meeting etc on a day, stipulated for wearing celoreng, and he or she turned up in bush jacket uniform (or No 2) wakakaka, guess what happened?

He or she was BARRED from entering the Mindef complex. There was no exemptions because the guards and subordinate panglimas were too scared of CAFS to buck his directive on dressing for that specified day.

Apart from missing the called-for meeting after travelling for thousands of kilometres to KL, the visitors would have wasted 3 to 4 days in that travelling from their respective bases for nothing - such was the idiocy prevailing, stemming from the directive for celoreng dress to be compulsorily worn on ONE DAY in a week for pompous instilling of so-called 'combative spirit'.

It became even more stupid when one considers those visitors BARRED from entering the Mindef complex were the guys actually at the 'sharp end' or 'coalface', all turned away because of a desk-bound jockey's bizarre belief. T'was a moronic indulgence and a sham of a mockery in upholding form rather than substance. There were more silliness from that CAFS but perhaps not in this post.

Minister Mujahid Yusof Rawa should be careful about turning the 'Use Jawi on every Friday' into a mockery. Use it everyday (well, more than 1 day in a week) or don't use it except in a staff's personal time.