'I gave them a second chance': Veteran recalls combating communists 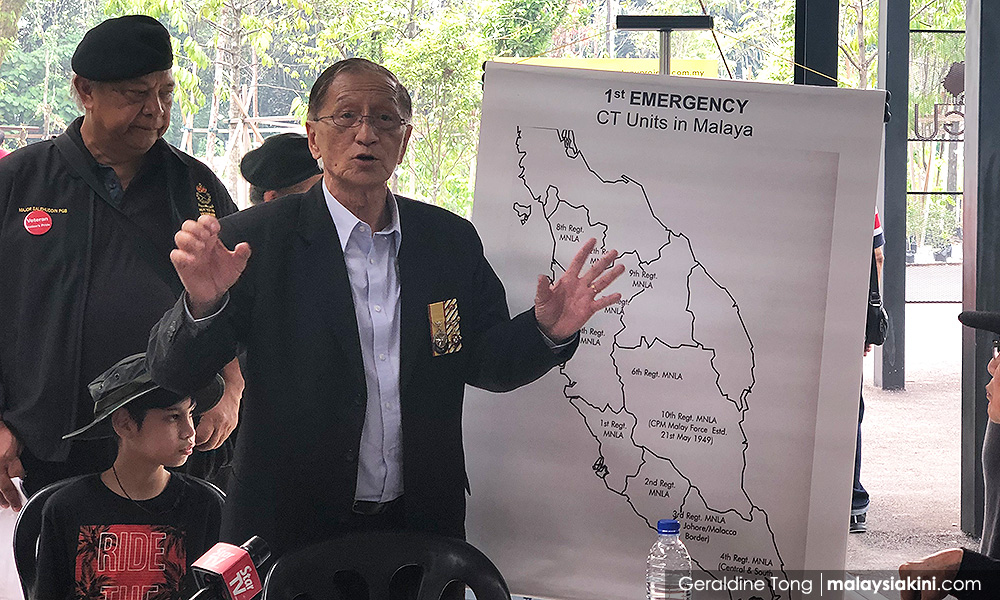 Paul Kiong spent more than a decade fighting communists in Perak during the Second Malayan Emergency from 1968 to 1989.
But now, the former Special Branch officer calls the 40 or so guerrillas he captured alive close friends.
"Three weeks ago, I met up with an ex-CT (communist terrorist), husband and wife, in Puchong, and we had tea.
"I used to have tea with them every now and again, they are very close to me.
"Why are they close to me? Did they fall in love with me? No. It is simply because I gave them a second chance, I didn't kill them," he said.
Kiong was speaking today at the Taman Tugu Human Library (TTHL) project, an event held on the first Sunday of each month at the Taman Tugu Nursery in Kuala Lumpur.
The former guerrillas he met in Puchong, he said, are now successful farmers.
"I am writing my memoir, but if there is any doubt or anything that I forget, I will contact all the ex-communists who were with me and those in Perak.
"We are still good friends. Kaodim (settle) here, then it is okay already," he said, tapping his finger against his head.
Kiong (photo) was referring to the re-education of captured communists for reintegration into society.
As part of TTHL, Kiong was relating his experiences fighting against the communists to an audience of about 30 people crowding around a square metal table.
He recalled how he infiltrated the communists' underground branch and went undercover as a courier and driver in order to gather more intelligence on their operations.
Eventually, he said, the SB had also infiltrated the militant branch by supplying them rations.
'A dead body to me is useless'
Despite all the information they managed to obtain, Kiong said, the SB tried their best to capture the guerrillas alive.
"The SB's policy is not to kill. We do not believe in the American war strategy in Vietnam (where they do a) body count.
"A dead body to me is a useless body. Why? He doesn't give me anything. It is a piece of meat, that is all. Why must you kill him when you can capture him alive?
"He, too, has a mother, a family. He has his siblings. His family is also looking forward to see him.
"It is only here that is the problem," he said, pointing to his head.
Similarly, Kiong added, his first priority back then was his family.
"The only thing you can ask for is to do your best and come out alive. Why? Because your family needs you.
"The inspector-general of police will replace you tomorrow, but there is no replacement for your family.
"So you come back for your family first, then you talk about your organisation. Commitment to your family first," he said.
Courage under fire
Despite being of only four living veteran police officers awarded the Seri Pahlawan Gagah Perkasa medal – the highest federal award for acts of courage and bravery in the field – Kiong admits that in a way, he was also a coward.
"I am scared to die. I am scared I will miss my loved ones, but because I am scared to die, I planned my operations to perfection, 110 percent, no mistakes.
"You cannot afford to make a mistake. I used the element of fear to plan the best.
"I made sure. I wanted to come home to my family, to my children."
The TTHL today also featured a number of other veterans relating their experiences to an eager crowd.
These veterans include retired Zaini Mohamad Said, the only living military officer awarded the Seri Pahlawan Gagah Perkasa medal, as well as former Port Dickson MP and retired navy rear admiral Danyal Balagopal Abdullah and retired brigadier-general Mohamed Arshad Raji.

(1) Not all CT were Chinese, not all heroes were Malays.
(2) Chinese policemen.