Mahathir a Pengkhianat Bangsa, a traitor to Malays? 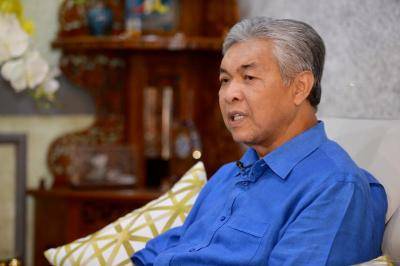 PETALING JAYA: Prime Minister Tun Dr Mahathir Mohamad had, at one point, labelled DAP "a racist party", and he himself has yet to retract such a statement, says Umno president, Datuk Seri Ahmad Zahid Hamidi.

Zahid said that Dr Mahathir must retract his statement questioning the "kafir" label by PAS.

"He must answer if he will retract that (racist) label from DAP, before he asks PAS to retract the 'kafir' label on Umno.

"Retracting past labels such as 'kafir' thrown to Umno at one point of time is not an important issue for us," said Zahid.

He was responding to the statement by Dr Mahathir on Sept 10 that PAS should first retract its statement labelling Umno as a party of infidels (kafir), before the two parties finalise their cooperation with the signing of a charter.

Umno and PAS will be holding a massive gathering called the "Ummah Unity Gathering" on Sept 13 and 14 to sign a joint charter officiating their political cooperation.

He said it is not something new for former enemies to work together.

"Anything is possible in politics. If someone who has always hated DAP can accept DAP as a political partner.

"That is also like the splinter parties from PAS, who could accept a leader whom they hated so much at one point of time.

"The reality of politics is that everything is possible. There are no permanent friends or enemies in politics," Zahid said.

"This is not a marriage of convenience, but we are trying to look at where Pakatan has failed. We see social status, FDI, poverty and investment sentiments from domestic and foreign investors that have to be corrected. It is our responsibility to build the confidence of Malaysians as a whole, but also to get those voters sitting on the fence and first-time voters.

"If we only hope for votes from party members, it would not be beneficial for us. The current government has returned Malaysia to the Third World," said Zahid.

He also denied that the Umno-PAS cooperation has compromised the stands of the two parties.

"Umno stands by the ideology of Islam of Malay nationalism, as stated in the constitution and Umno's constitution also states firmly the multiracial concept.

"PAS, as a party based on Islam, is based on plurality of the communities in our country. We have not compromised our stands," said Zahid, who is also Bagan Datoh MP.

Ahmad Zahid also questioned Dr Mahathir's earlier statements that Malays are under too many parties and should be united under one umbrella party.

He further explained that Umno and PAS may be politically cooperating now, but he hoped that it would be upgraded into a political collaboration come the next general election.

Zahid also said he would not say no to efforts to turn the current political cooperation towards a "political coalition".

"This country cannot run away from the two-party system, where the opposition would have too work with other parties to form an understanding to ensure that the government is formed even with one-seat majority," said Ahmad Zahid.
Posted by KTemoc at 11:20 am