What does M stand for? 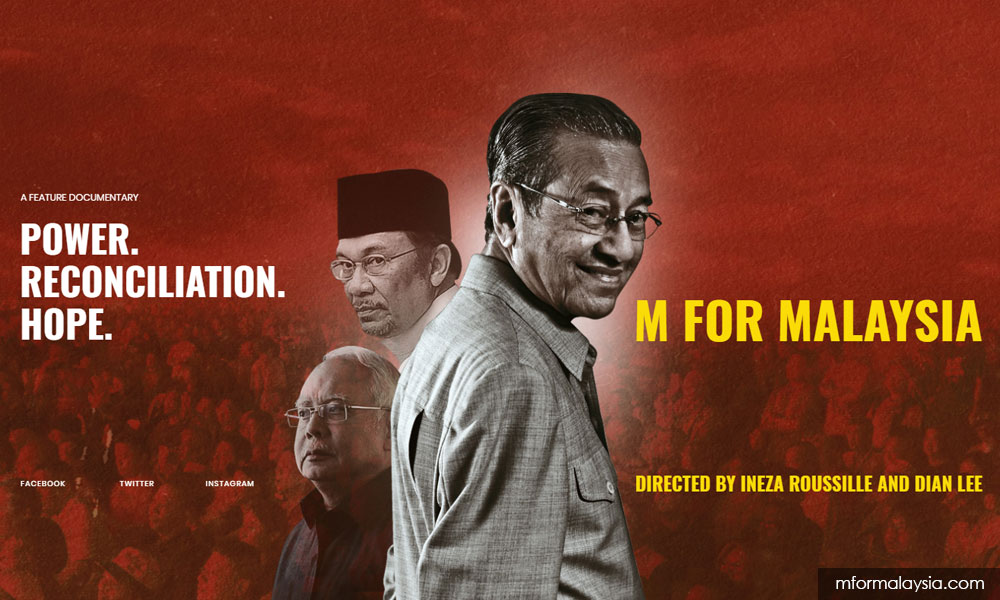 “There is hardly a better way to avoid discussion than by releasing an argument from the control of the present and by saying that only the future will reveal its merits.”
- Hannah Arendt, 'The Origins of Totalitarianism'
COMMENT | Some folks asked me, what I thought “M” stood for. When I first heard of this film, I thought a group of Malaysians were organising a screening of that great Fritz Lang classic “M”. Sign me up.
When I realised I was mistaken, I assumed that a group of young Malaysian filmmakers were cheekily attempting to start a discourse with a series of vignettes about what M stands for in "New Malaysia". I was wrong again. Apparently, M stands for Malaysia or Malaysians.
But does it? I think M stands for something else. It has too, right? "M" needs to reflect what is happening in Malaysia now, not what we hoped would happen. With this in mind, here is what I think M stands for.
M stands for manifesto – more specifically, the Pakatan Harapan manifesto. The tagline for the manifesto was “Membina negara memenuhi harapan”. I kid you not. Someone actually came up with this tagline. According to the prime minister, the Harapan manifesto was cooked up thinking they were going to lose, hence they made promises that they really did not think they could deliver.
Now some people will tell you that they did not even read the manifesto and they just voted to kick Najib Abdul Razak out. Which is fine, I suppose but it would mean that they believed that saving Malaysia meant kicking out Najib. Really? Memories of some are short, I guess, because the same rhetoric that was used against Najib was also used against the current prime minister and you know what? Malaysia happily carried on with BN getting the majority of votes until the current prime minister decided that Umno needed to fall.

What does this tell you? It tells you that the country was not on the brink of collapse then and you should not buy into the propaganda that more time is needed now to reform the system.
M stands for mendacity – okay, so the manifesto was unrealistic but this does not mean that Harapan can’t carry out reforms that many Harapan political operatives know would actually save Malaysia. Instead what Harapan does is stall reforms and pander to the far-right and religious extremists in this country.
Klang parliamentarian Charles Santiago says that Harapan needs to “reconnect with the people with a narrative that reflects their aspirations,” but so far the narrative coming out of Putrajaya is the same old narrative of the “social contract” of racial and religious privilege.
Policy is not determined by progressive ideas but rather what would not spook the Malays. Meanwhile, progressive Malaysians who were hoping for a "new Malaysia" are told that things take time and the delivery of reforms is predicated on how long it would take to convince the base of the opposition coalition.
Does this make sense to anyone?
M stands for manipulation – let's face facts. "New Malaysia" is a con. Harapan political operatives like to wax lyrical about this "New Malaysia" when it really does not mean anything. What about the people who did not vote for Harapan? Those people who support PAS and Umno? Are they living in "Old Malaysia"?
Umno and PAS partisans send me social media snapshots of Harapan partisans, these so-called “progressive” voices of "New Malaysia", claiming that the Malays will crawl back to Bersatu for dedak. Do people understand how dumb this statement is? This would mean that Bersatu has replaced Umno and that the system of racial and religious privilege would continue, which would mean that there really is no "New Malaysia".

I happen to think that Umno/PAS supporters will carry on supporting Umno/PAS because the Harapan regime will continue pandering to the far-right and religious extremists so supporting Umno/PAS is like having your cake and eating it.
There are people who believe that Harapan needs decades to fix what BN did. Harapan will not have decades. If people think that they can comfortably slip back into the old ways that sustained the democratically-elected BN regime for decades, they are mistaken. The political terrain is different now. The means of communicating propaganda are different.
M stands for malfeasance – the racial and religious kind. Whenever Harapan panders to the racial and religious extremists in this country, they are not hurting the non-Malays. The non-Malays have seen their public and private spaces eroded by decades of racial and religious intrusions. This is nothing new. In fact, what was hoped for was a cessation of state intervention into our private and public spheres.
The community that really gets hurt are the Malays. What’s more, they are really hurting young Malays. Unemployment, religious control, lack of avenues to express dissent and the continued efforts to label individuals or groups as “deviant” have resulted in a community which not only fears the “other” but is also suspicious of their own kind.
M stands for malaise - I get so many e-mails and texts from people who have this sinking feeling that this is – was – our last chance to do something. So why aren’t the people we elected doing something? I get calls from educationists hoping that they would be called in to help craft a new education policy which would help the younger generation in the new world they are going to face. Nobody called.

Policy wonks who assumed that their ideas would be welcomed in the new administration, and who were willing to discuss new ideas instead of the same old formula for racial and religious equilibrium. Former bureaucrats who were put in cold storage or shafted, who hoped the new administration would call them because these people know how to work within the system to get things done. Never happened.
That sinking feeling you are getting is the feeling many of us have. The more political operatives ask for time, the more you know they are just stalling for time.
The question is, what new form of devilry will emerge from voting for the devil you know?
S THAYAPARAN is Commander (Rtd) of the Royal Malaysian Navy. A retired barrister-at-law, he is one of the founding members of Persatuan Patriot Kebangsaan.
Posted by KTemoc at 10:53 am