Mahathir - get out, you've failed the rakyat

Yoursay: Dr M is fast running out of rakyat's goodwill 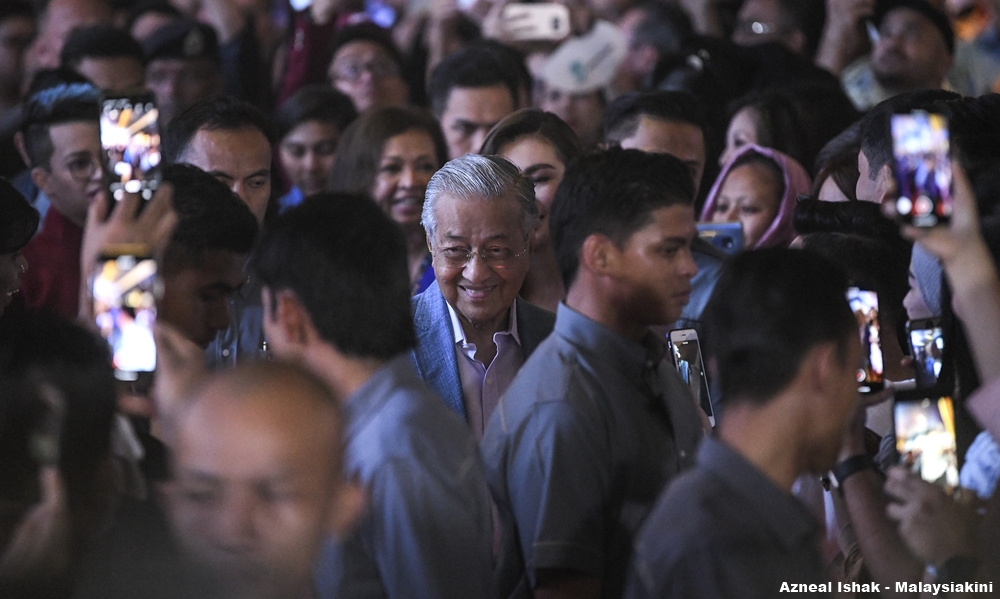 YOURSAY | 'The 'M' in the documentary has now come to stand for manipulation and mischief-making.'
'M For Malaysia' is not just about Mahathir
MS: So, the granddaughter of Prime Minister Dr Mahathir Mohamad produces a film about her long-in-the-tooth grandfather, and mixes it up with the futile struggle of hopeful Malaysians in this long-suffering country.
While her intentions are to be lauded, the ‘M’ in the story has now come to stand for the manipulation and mischief-making the old man is once again known for.
The appointments of his Bersatu gofers like the ‘black shoe’ Education Minister Maszlee Malik, the ‘dinner host’ Youth and Sports Minister Syed Saddiq Syed Abdul Rahman, and the ‘yet to stir’ Home Minister Muhyiddin Yassin, to wreck the hopes and aspirations of Pakatan Harapan voters are once again brought into sharp focus.
So what does ‘M’ mean to you? It means more misery under Mahathir as he continues to manipulate Malaysians with his khat, the Islamic preacher Dr Zakir Naik, and other ‘toxic’ wastes. His exit in every sense will not be too soon.
Anonymous 770241447347646: They say a bird in the hand is worth two in the bush. Harapan won because of the massive Chinese, Indian, as well as 30 percent of Malay votes.
All Harapan had to do is to make sure this percentage is taken care of and work on the B40 (bottom 40 percent, many of whom are Malays). This will help to bring in the extra 10 to 20 percent Malay votes for the 15th general election.
Mahathir has forgotten the struggles all Malaysians had to go through to put Harapan in power - the numbers that flew back just to make that change.
Meanwhile, others work tirelessly on the ground. Thousands of others tried to gather as much support as they can through the alternate media, relatives and friends.
This was all done because of the love for the nation that they called home.
In one stroke of his pen, Mahathir introduced khat, protected Zakir Naik and Economic Affairs Minister Azmin Ali, and sent the Chinese and Indian votes running for the exit doors.
Does Mahathir have his private agenda? The decisions show his ungratefulness to the supporters that put him into power.
Secondly, he is back to playing the same game as before.
Umno had tried to be more religious than PAS by introducing new policies that would win the hearts of the Malays. Now, Harapan is making the same mistake as Umno did.
Religion will not provide food on the table, a reasonable-salaried job, better healthcare, education, or even a cheap and comfortable roof over their heads.
If the focus is given to these issues, the people will realise who have taken care of their basic needs in the long run. They will be grateful and support the party that really paid attention to them.
All these can be achieved if the agenda is genuine and not for some selfish self-interest. Mahathir has to show that this nation really belongs to all Malaysians and not to the selected few.
Anonymous_3f4b: Some are still basking in the aftermath glory of the 14th general election. Get real. The honeymoon is over. People are disappointed and disillusioned with Harapan’s empty promises.
Racial and religious issues are the order of the day. The economy is in a tailspin. Income is low, while taxes and cost of living high. Inane and stupid policies are being churned out, and all this while, the people grouse and suffer.
They are not delivering or seen to be delivering. There is no ‘Malaysia Baru’. It is merely an extension of ‘Malaysia Lama’; maybe even worse. The ‘M’ in the film should stand for ‘Malu’ (shame).
Legit: Mahathir, the majority of Malaysians do not want you as PM anymore. You have done your part and now please resign gracefully.
You are destroying the very fabric of the Malaysian society with your cunning, racist, backhanded and nasty tricks.
Please leave without a fuss and enjoy your remaining years with your good friend, Zakir Naik. Otherwise, Harapan can forget about winning GE15.
Anonymous #33227154: Indeed, Mahathir doesn't deserve this honour.
He wasted his second chance to improve Malaysia, and instead went back to his racist political games. He has lost the respect from Malaysians.
JW: Given that most of Mahathir's family are involved in the making of the documentary, how objective and balanced it is will be an issue.
This is not just about observing certain aspects of making the documentary, like having former Bersih chief Ambiga Sreenevasan make an important comment to end the programme.
It is not really enough. A simple example - why that title?
Sulaiman Bin Che Long: The epic struggle of 20 years of reformasi culminated in the toppling of the rotting and putrid Umno, but unfortunately, the Harapan government is dysfunctional.
Yes, the title is wholly inappropriate. It seeks to appropriate the people's struggle to glorify someone. Is this a Malay trait?
I cringe at the title. If we straighten up the crooked M, we get a H-H for Harapan.
Anonymous_1545592198: It’s interesting how this documentary would be celebrated if Mahathir actually did the job for which we voted him in his second round as prime minister, but sadly all the comments here are negative as he has greatly disappointed those who voted for Harapan.
The rakyat did well to vote for change but the leader greatly disappoints.
Posted by KTemoc at 2:16 pm