The Third Reich Lives On

Israeli is deliberately and repetitively closing Karni, the only exit point for Palestinian agricultural goods to eb shipped from the Gaza Strip to Europe. The Palestinians, having waited in vain for several days for the blockade to open, have in frustration thrown away their perishable goods.

The blockade is the avowed Israeli punitive tactic to punish the Palestinians collectively. The Nazis loved this tactic – to punish the innocents together with the guilty. 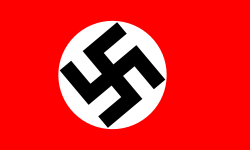 Israeli vindictiveness has gone beyond security measures. This is their object lesson for the Palestinians who had the nerve to vote in a political party unacceptable to their overlord Israel of the Third Reich - The 1st Reich was pre-Babylon, the Second Reich was post-Babylon.

The Israelis have certainly learned well from their Nazi oppressors. The USA is of course complicit, having extracted back their so-called aid of $30 million. It is still demanding another $20 million outstanding.

I know what the average Arab, especially a Palestinian, think of Israel, but I wonder what they now think of Uncle Sam?
Posted by KTemoc at 7:27 pm