MCA's Pig of a Problem 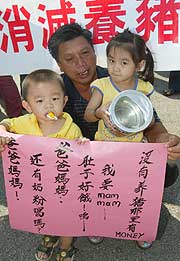 Tomorrow all pig farms, except for one, in the state of Malacca must stop operations or they will be seized by the state government. The farms will be forcefully sealed should the farmers fail to comply. The sole exception will be allowed to appeal prior to a decision on its closure.

The farmers are utterly frustrated with MCA State Exco member Seah Kwi Tong for failing to convince the government to change its decision. A hundred angry pig farmers have been protesting outside his house, though no FRU units are around except for 20 policemen. A case of tough it out for the MCA, I suppose?

It seems that Seah had been promising a group of 81 pig farm owners something along the lines of ‘Pang sim, wah liao li’ [no worries, I’d sort it out]. According to one farmer, Lim Ah Keat, Seah had promised on 3 occasions over the past few months that the matter would be resolved, but unfortunately it hasn’t, which in some ways shows that the MCA as a partner in the BN has no clout, not that we don’t already know this reality. 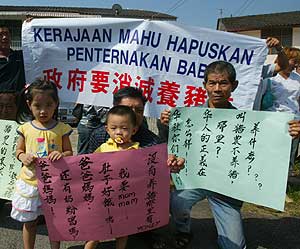 One farmer bemoaned “If we lose our farms, how are we going to afford food and books for our children?”

Their last hope hangs on the ability of Deputy Minister of Agriculture and Agro-Based Industry Mah Siew Keong to convince the Malacca state government to withdraw its threat. Mah flew down to Malacca yesterday.

The farmers have so far wisely refrained from seeking the opposition as that would have made their case worse. But if the MCA federal deputy minister failed, they would have to turn to the Opposition, namely the DAP, though that’s not going to stop the closure - but by then, what choice would they have? They are also considering a civil suit.

Deputy minister Mah quietly hinted that the appeal of one sole farmer, Chin Nam Yee, who is also Malacca Livestock Breeder's Association president, could affect the cases of the rest, a sort of template solution. Could it be a face saving gesture to allow the pig farms to continue for a reasonable while until the farmers may make arrangements to leave the state?

But one thing’s for sure, the farms will go one way or another. It’s unlikely the MCA can do much except delay the seizure orders to permit the farmers time to pack up.