In the match between Australia and New Zealand, the 1st game went to the Kiwis while the 2nd to the Aussies. But in the 3rd, one of the NZ double was so damn pissed off with an Australian player that at a crucial point of 19-19 in the decider, he yelled "You're a f---ing cheat Brehaut". He reckoned the Aussie's's drive serve was illegal because it had been made with the racquet above the waist. 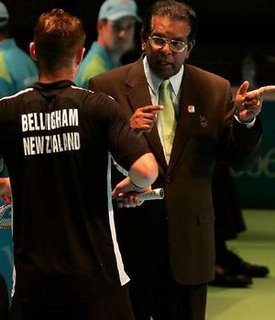 For the F-word, an official flashed Kiwi Geoffrey Bellingham the red card [though unlike soccer, he still continued to play] while the umpire awarded Australia a point. The Aussie pair won the next point to enter the semi-final, making its Australia's 1st Commonwealth Games badminton semi-final in eight years.

Aussie Brehaut explained that his serve, known as a drive serve, was not illegal, having learnt it while training in KL. Whoa ho ho! Malaysia has been implicated here!

Brehaut said Bellingham found it difficult to return his serve and turned sour grapes. He took the high moral ground and said he wasn’t going to sink down to the Kiwi's level - of course by then the Aussies had won a free point out of the Kiwi's recklessness. In sports it doesn't pay to lose one's temper, even if one had been wronged

Bellingham said he regretted making the comments but stuck by his cheating allegation: "In badminton you have got to keep the racquet below the waist (and he didn't)."