Anwar Ibrahim - Too little, too late!

Anwar Ibrahim wants some answers to the status of Petronas’ Tabung Warisan - a fund set-up 20 years ago with the aim to help the government when the country becomes a net importer of oil in the future. Anwar said:

“Annually, a sum from Petronas’ revenue is contributed to Tabung Warisan. It has been 20 years. What is the amount?” Well, the ‘last 20 years’ he referred to would mean the stretch of peirod going right back to 1986.

Hmmm, I wonder who the Malaysian Finance Minister was from 1991 to almost the end of 1998, a period of almost a decade that covers half of the period he has questioned. Why wasn’t the same question asked then? 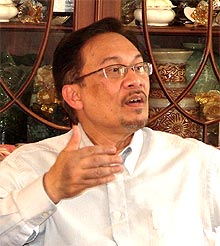 In the Wikipedia article on Anwar Ibrahim, bearing in mind of course that 2 of the 3 references for the Wiki article have been those of Raja Petra Kamarudin, one of Anwar Ibrahim’s most dedicated supporters and editor of Malaysia-Today, a blogsite that’s seen as promoting Anwar Ibrahim, the following extract was obtained:

“Anwar's attacks on the suspected nepotism of Mahathir's rule were fortified by widespread discontent over the perceived suppression of democratic rights in Malaysia. Critics questioned Anwar's actions, wondering why he had waited until he was sacked to publicly challenge Mahathir's actions."

"Some suggested that he had engaged in nepotistic and corrupt activities himself, and was using the issues to topple Mahathir. It was also possible that he harbored hopes of replacing Mahathir although Anwar was no longer a member of UMNO and every prime minister had been an UMNO leader.”

Well, perhaps Anwar wasn't too worried about being sacked from UMNO because he must have thought he would be swiftly 'invited' back to the party as its new leader. Probably Anwar felt he had the charisma and popularity to use street power a la Jakarta to put himself back into power. That he failed wasn't due to his lack of ability or incorrect thinking, but more of Mahathir's greater ability as a power player.

That's why I find it extremely difficult to believe in Anwar’s current attempt to take the path of democratic values, proper governance and high morality, when he had failed to do so while in a powerful position as both Finance Minister and Deputy PM. Why should and would I believe in him now?
Posted by KTemoc at 5:20 am