On Friday, armed police fired water cannons to break up an anti-government rally after protesters campaigning against the fuel price increase defied orders to disperse.

KTemoc Note: The water was laced with crowd dispersal chemicals. One reader challenged me to identify the chemical as it could well be just the chlorine in the water. Apart from the argumentative nature of his query, I doubt it’s that or fluoride to improve the protestors’ dental health.

Crowd dispersal chemicals are usually designed to cause breathing irritation, disturb the nervous system or sting the protestors’ eyes to disrupt their formation or concentration.

There’s also a new calmative chemical, apparently derived from opium based products that drugs/dulls the mental faculties of the crowd. Then there’s special dye to mark protestors for eventual identification and arrest. Both irritants and dye could be used together. Washing away the chemical attack with lots of water could well be the simplest handy solution.

Old-timers have advised me that members of the old Barisan Socialist [active in the late 50's to early 60's] were masters at handling police chemical attacks. Their younger members would come prepared with goggles and wet towels.

The same reader also claimed that the FRU was only performing its duty in dispersing the crowd. I wonder why the police had to resort to heavy handed methods such as chemical-laced water jetted from a cannon, when the protestors were generally peaceful. Nor do I see the need for police to even disperse the crowd, as they were not a threat to lives or properties.

The 800 protestors had staged just a peaceful sit-in at Petronas Twin Towers, so there was no question of violence.

It may well be that (1) the police are so used to such heavy-handed tactics that they wouldn’t know what else to do, (2) the government is so thin-skin that it cannot tolerate peaceful demo, (3) ………………….. (you fill in the reason!). 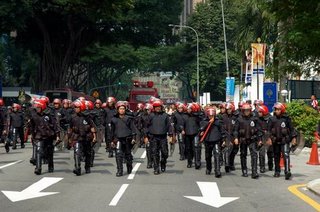 not a pleasant sight for women & children in thr protest

Well, there’ll be 2 more protests. One on the 19 March will be a double barrel protest against both fuel price increase and the Americans. The second objective is to support a global day of action against the invasion and occupation of Iraq. Incidentally these two issues, oil price hike & US invasion of Iraq, are interrelated so protestors will be killing 2 birds with one stone.

KTemoc note: Will the Americans be now preaching for Malaysia not to suppress democratic freedom of expression, or will it remain conveniently mute?

The second protest will be on 26th March, led by the Malaysian Trades Union Congress (MTUC).

Malaysiakini advises that the protests are being held during the weekends in order to draw larger crowds. It suggests that there’ll be a series of such anti-government rallies.

Some protestors have even demanded that the nation's leaders either resign or reverse a recent fuel price hike. Yeah, if you are going to be jetted with nasty stuff, might as well go the whole hog in the demands, though don’t hold your breath for the former demand to be met. 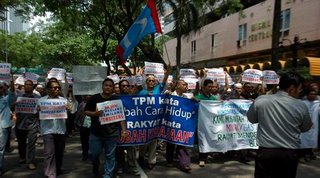 Malaysiakini mentioned that the government has been shocked by the depth and breath of the protests and has embarked on a public-relations offensive to justify the rises.

KTemoc note: Well, the offensive component has been amply demonstrated with the FRU playing a leading role, while the PR part has certainly drawn some adverse publicity [was that what the government wanted?]