Not entirely unexpected, the government's current damage control over the unpopular fuel price hike has begun to damage the control of private businesses. Its officials are now prescribing to entreprenaurs - hawkers and operators of coffee shops or small restaurants, etc - how to run their business so as to achieve smaller profits. Yes, you heard me right, 'smaller profits'!

Oh, those rapacious traders, hawkers and bus companies can't be trusted, not like our efficient and thrifty government. Why should business make silly stuff like profits? Look at MAS, Bank Bumiputra and Renong as 3 outstanding examples of typically good Malaysian business with strong links to our government.

Kedah State industry, transport, consumers and foreign workers committee chairperson Chong Itt Chew [wow, his title!] enlightened us ignoramus with his amazing study, that a glass of teh-tarik [Malaysian white tea] cost only 35 sen to prepare and thus, with traders selling same between 80 sen and RM1, they have been making a profit of more than 60%. Therefore they shouldn’t increase the price of the teh tarik. 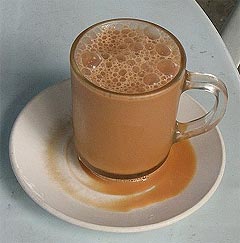 rise, invariably as they would with increased transportation costs due to more expensive fuel, the traders must absorb those extra costs, including those unseen overheads like water, electricity, licence fees, illness, spillage, broken glasses/cups, etc. Under 'etc' there are items such as - much as we don't want to know about it and pretend these don't exist - bribery or extortion whether from gangsters or non-gangsters [you work it out what/who the latter are].

That’s how good business companies like MAS, Bank Bumiputra and Renong have operated. That's why they are known to be leading examples of Malaysian business concerns [yes, they are ‘concerns’ to everyone].

So here we see the officials coming up with their fantastic business logic, all for the purpose of teaching Peter how to treat Paul.

If I am a trader and my profit margin is 60% I would foolishly ensure it remains at 60%, because that’s my business projection. But now, having heard such pearls of bull … eh … wisdom, I will ….. But of course I am not a business person, let alone a good business person.

Chong pronounced brilliantly: "Traders should not, whimsically, raise prices of food and drinks by giving the hike in fuel prices as an excuse."

Indeed traders shouldn't give excuse, because fuel price hike doesn't affect anything nor anyone, stupid! But the word 'whimsically' - wow! That's a full 4-syllable word - I wouldn't be able to pronounce it!

Chong said the state enforcement division had conducted checks at over 2500 premises since the hike in fuel prices, with 29 premises fined a total of approximately RM2900 for raising prices of food and drinks. He also boasted of seizing goods worth nearly RM4000 [and he was so detailed he gave the figure down to 15 sen]. Amazzzzzing!

Meanwhile in the south, in 1001 Nights’ Putrajaya itself, Entrepreneur Development and Cooperatives Minister Mohamed Khaled Nordin praised bus operators for removing a 10 percent surcharge on fares. He didn’t inform us how he got them to do it.

He wants public members to report to his ministry whether the bus operators do keep their promise. If they don’t, the Commercial Vehicles Licensing Board (CVLB) will revoke their bus permits - naughty naughty, those bus operators shouldn't break promises!

231 bus operators had to indicate to the CVLB whether or not they were capable of operating without raising their fares. I bet that all would have said yes.

Then he blessed us with his wisdom, by informing us that "There are innovative ways for them to deal with the recent fuel price increase and as long as it doesn't involve asking for RM1 subsidised diesel or hiking fares, it's all right with me."

Unfortunately he didn’t reveal any of the ‘innovative ways’, though I suppose we may take it that as long as the bus companies don’t raise their fares, that would be innovative.

He provided further gems of management skills. He averred that express and stage bus operators should keep their house in order if they wanted to remain afloat, because the reason that some bus companies were affected by the fuel price hike has been their inability to manage their operations well such as purchasing expensive buses with not that many seats.

See, it's so clear that the problem has never been the fuel price increase, so what the hell are you bus companies complaining about? You should improve your management. Thank goodness we are blessed indeed with such brilliant ministers and officials.

KTemoc note: While I have supported the fuel price increase, I feel annoyed that the government ministers and officials continue to insult us with inane excuses or reasoning such as the ones above. We want them to know we aren't idiots while OTOH we think they are! The PM should re-evaluate the calibre of his people if they can't even explain his fuel price increase in less intelligence-insulting manner.

Please read my earlier postings on subject for context as to why the Malaysian people are angry: