There are 82 pig farms in Malacca. The state government state Exco made a decision in April 1999 to centralise them. But it hasn’t yet pinpoint where.

Today, DAP Bandar Hilir assemblyperson, Goh Leong San, gave a different story. He said the ulterior motive of the Malacca State government has always been to erase the pig industry off the Malacca map.

He said: "The state government stopped issuing license to pig breeders after 1991. They had passed a resolution in the state exco meeting in 1999 to close down all pig farms in Melaka."

Were the 2 MCA exco members compliant or sleeping when that resolution was made? Both coincidentally disappeared when the press tried to contact them.

However, in December MCA state exco Seah Kwi Tong did raise the matter with Malacca Chief Minister Mohd Ali Rustam who agreed (only verbally) that there will be no action for the time being. Sinchew Daily, a Chinese newspaper, reported that one of the MCA state exco members said state secretary Ismail had also promised the Malacca government would not demolish the farms.

Of course pigs are haram (not kosher) to Muslims, and I can understand why they would be 'cold' towards stuff like pigs breeding, but we live in a multi-ethnic, multicultural society, and so long as an activity that's associated with a taboo of another ethnic or religious group does not intrude on the rights or privacy of the group, there should be some degree of tolerance.

What may be forbidden to some religious groups - for example, beef is taboo to Hindus and Buddhist followers of the Kwan Yin sect - may be consumed by followers of another religion, like Taoists, Muslims, Christians, Confucianists or even other Buddhists!

But regrettably the Malacca government, without any warning, has ordered the closure of all the pig farms in the state in a letter, which was only issued to farmers on March 1. The letter, from the state’s veterinary services department, gave the breeders just two weeks to comply.

The state government doesn’t care how those farmers do it but the 82 farms must be closed; so the farmers, for all it cares, can sell, shift the animals or use any means necessary to ensure that their farms are not operational and closed after the 15th of this month.

If only pigs can fly ..... though that's not what the paraphrased old Scottish saying actually means, I am sure the breeders would be happy to fly theirs off.

If those farms aren’t closed ordered by the deadline, they will be seized!

Rustam did set some conditions for not closing the farm - he demanded that the breeders convert the land use, submit the farm draft plans and building plans. But the farmers complained that the short notification [just a week left by the time the government notification letter arrived in their hands] makes it impossible for any farmer to comply.

It seems that the State government is determined to close or seize the farm, obviously by stealth, considering the unreasonable time given and the verbal promises and assurance by Rustam and state secretary Ismail!

But what about the centralised place that was earlier mentioned? Tough, the State government had not yet determined the location, and most probably never will. So, as far as the Rustam government is concerned, the pig breeders can get lost, or go organise a pig farming cooperative to apply for a place, or fulfil Rustam's 3 conditions. All these in 1 week! This time I say it in its intended meaning - And pigs can fly.

As for Rustam's or state secretary Ismail's promises made to the MCA exco members of not closing the farms, well, as we all know of politicians, promises have always been meant to be broken.

The frightened farmers tried to place ads in Chinese language newspaper asking for the public’s support to have the order revoked, but four Chinese newspapers had declined to do so (presumably those owned by the MCA). Only the Oriental Daily has accepted the ads. The ads carrying the picture of 4 pig farmers about to be strung, metaphorically shows the death of their livelihoods. 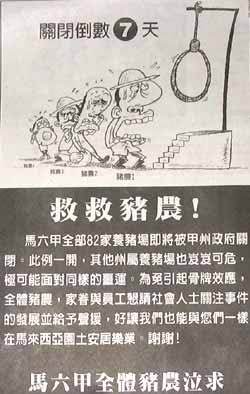 Now, MCA Mah Siew Keong, who is Deputy Minister of Agriculture and Agro-Based Industry, announced that he is attempting to meet Malaccan officials to discuss the problems, but he quickly disclaimed any wishful breakthrough, stating his federal ministry has no power over state policy on pig farms.

Back to Rustam - remember Rustam and his 4B Youth snoop squad? Is some kind of UMNO party election coming up? Is he trying to show his party credentials through a purported Islamic approach?

First, there was his proposed but eventually aborted 4B snoop squad where he was ticked off by the federal Cabinet, and now, we have the intended elimination of the haram pig farm!

What next from Rustam until he gets what he wants from the party?