Chong Eng, DAP deputy secretary-general and MP for Bukit Mertajam has expressed her dismay that policewomen including non-Muslims are being forced to wear the tudung [Muslim female headscarf]. She referred to a News Straits Times report where IGP Mohd Bakri Omar said that all policewomen will have to wear a headscarf at official functions with immediate effect.

The IGP wants this to start off on the 199th Police Day parade this coming Saturday. The IGP said everyone must wear the headscarf purely to ensure uniformity, and the personnel may remove the headscarf after the parade if they wish to. 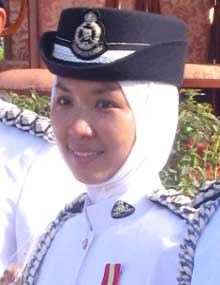 Chong asserted that ‘uniformity’ is not a strong enough reason to impose the tudung on policewomen.

She said: “I will support the move if Bakri can persuade me that uniformity will lead to efficiency and comfort for the policewomen in the course of their duties.”

She wants Bakri to respect the right of choice among policewomen, since the education ministry has already stated that the tudung is not part of the school uniform.

Another DAP leader [what do you expect, MCA or Gerakan?] Fong Po Kuan raised the same concern, suggesting that the IGP’s directive is a form of uncalled-for ‘pressure’ on female police officers. Fong asked authorities and high-ranking officers to cease and desist from targeting women’s dress code. She added to Chong’s challenge of the IGP explanation of ‘uniformity’ because it is not an acceptable excuse as it goes against the principle of freedom of religion.

I agree with both of them, not because I am a DAP member [which I am not] or that I am a non-Muslim [which I am], but because the IGP explanation is nonsense. I have historical proof that the IGP has been uttering rubbish insofar as 'uniformity' on formal parades is concerned.

And my support of my assertion is that for decades, yes decades, in the Royal Malaysian Police or any branch of the Armed Forces, the Sikh members of these two Services have worn turbans without other members required to wear the same turban to show ‘uniformity’ on formal parades. The only requirement has been for the turbans to be in the colour of their respective regiments or Services.

When Sikh personnel in their magnificent turbans were/are on parade with their non-Sikh colleagues in the Armed Forces or Police there was no discernible lack of uniformity but instead a fantastic Malaysian picture of smartness and unique characteristic which we have been and still are all proud of.

Fong is absolutely right that senior officers like the IGP want to jump on the bandwagon of being seen to be Islamic-ly correct, to score brownie points.

I challenge the IGP to tell his male police officers to all wear turbans in the next Police formal parade that involves a Sikh member, purely for 'uniformity' of course.
Posted by KTemoc at 9:38 am