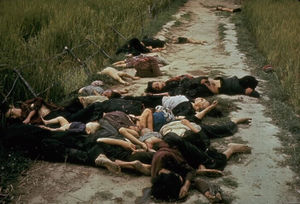 My Lai
Q: What were the children in the ditch doing?
A: I don't know.
Q: Were the babies in their mother's arms?
A: I guess so.
Q: And the babies moved to attack?
A: I expected at any moment they were about to make a counterbalance.
Q: Had they made any move to attack?
A: No.

- Prosecutor Aubrey Daniel examining Paul Meadlo, a US soldier at My Lai

On the morning of 19 November 2005 in Iraq, US marine troops travelling in a humvee was struck by a roadside bomb near Haditha. One man, Lance Corporal Miguel Terrazas died from that blast.

The following day, the Marines issued a statement saying that Terrazas and 15 Iraqi civilians had died when armed men attacked the convoy with small arms fire. It also mentioned that the Marines had returned fire, killing 8 and wounding one other.

But according to eyewitnesses and local officials interviewed by the Time magazine over a period of 10 weeks, the Marines had cold-bloodedly killed the civilians, and falsely reported they were killed by unknown armed men.

Apparently the Marines were seeking revenge for their dead comrade and went on a rampage in the nearby village after the attack, killing 15 unarmed Iraqis in their homes, including seven women and three children.

As I mentioned in my earlier posting The American Black Room the US troops today are no longer the equal of their WWII predecessors – no, indeed far from it – they are more like some of their grubby Vietnam counterparts, killing innocent women and children and unarmed civilians like what happened at a village called My Lai.

Human rights activists said the massacre must rank as the worst case of deliberate slaughter of Iraqi civilians by US soldiers since the war began, not unlike, as mentioned, My Lai in Vietnam. But then, the American military do have the notorious pedigree to easily earn another blackmark as war criminals.

A couple of months back, Time magazine presented military officials in Baghdad with details of eye-witnesses’ accounts of the story. The US military then opened its own investigation into the massacre.

Its initial finding agreed that, contrary to the marines' initial report, the 15 civilians died at the hands of the Marines, not the armed attackers. But then, typical of US military investigation into the crimes of their own troops, it added that the available evidence did not provide conclusive proof that the Marines deliberately killed innocent people in Haditha.

Oh no, of course not! The marines were only joking when they claimed unarmed gunmen killed the villages. Besides, those 15 Iraqi men, women and children all died of heart attack - probably out of excitement at seeing their wonderful American liberators!

Rest assured that the marines, like those murderers at My Lai, will not suffer any legal consequences for this unmitigated war crime, or even if they ever do, the punishment would be something like loss of 7 days' pay or a demerit point in their conduct sheets.

And this case exemplified the very reason why the US, so-called paragon of justice and rule of law has vigorously resisted recognition of the International Court of Justice, or otherwise many of its troops would have been Nuremberg-ed, Milosevic-ed or Saddam-ised.

My Lai Post-script:
After Lt William Calley was found guilty of premeditated murder on all specifications he was sentenced "to be confined at hard labor for the length of your natural life; to be dismissed from the service; to forfeit all pay and allowances."

President Nixon ordered Calley removed from the stockade and placed under house arrest. He announced that he would review the whole decision.

Nixon's action prompted Aubrey Daniel to write a long and angry letter in which he told the President that "the greatest tragedy of all will be if political expediency dictates the compromise of such a fundamental moral principle as the inherent unlawfulness of the murder of innocent persons". Read his letter to President Nixon here.

On November 9, 1974, the Secretary of the Army announced that William Calley would be paroled. In 1976, Calley married. He now works in the jewelry store of his father-in-law in Columbus, Georgia.