This report by Malaysiakini of another alleged police abuse - almost another Squatgate but with a 60 year old woman - is so sickening that I am not going to touch the report, which is reproduced below in its entirety, to enable those of you without subscription to Malaysiakini to read it in full:
********
Sixty-year-old homemaker Cheng Pik Wai claims she was stripped naked and lost RM200 during her three-hour detention at a police lock-up earlier this month.

Cheng, who migrated here 35 years ago from Taiwan after marrying a Malaysian, related her ordeal at a press conference at the Parliament lobby this morning.

The press conference was organised by DAP parliamentarian Teresa Kok.

According to a copy of her police report lodged with the Jalan HS Lee police station, Cheng was detained at the Dang Wangi police lock-up (previously Pudu jail) on March 11. This followed a misunderstanding that she had stolen goods from a shopping mall in the city.

Cheng, who holds a Malaysian citizenship, was sent to the lock-up at about 5pm. Here a policewoman, whom she identified as ‘Samsiah’, told her to surrender all her belongings.

“At first, Samsiah put all the coins taken from my purse inside a plastic bag. However when she counted the bank notes, I saw her take out a few notes and put them inside her drawer."

“She then said the money was for bribe and told me in Cantonese ‘bei ngo yam cha’ (give me to drink tea),” stated the mother of three in her report.

“She told me if I didn’t give her (the details), I will be asked to do ear-squats,” said Cheng, who added that she refused to divulge the information but was not asked to perform the squats.

She also claimed that the policewoman had asked for her jewellery.

“Subsequently, two other policewomen brought me to a room and told me to strip naked. Then, they asked me to turn around three times."

“When I did this, they started laughing. I felt humiliated,” she said in the report. 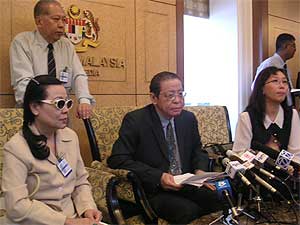 Cheng was released, without having her statement recorded, on police bail at about 8pm when her husband showed up.

According to her, after the two policewomen returned her belongings they asked for money in Cantonese ‘bei lui’ (give money).

Cheng said she gave them RM10. After she left the premises, she discovered that about RM200 had gone missing.

She then returned to the detention centre with her husband and an argument broke out between Samsiah and them.

“Samsiah wanted to return RM10 to us but my husband refused. Then Samsiah hit the table in front of us and my husband told her that we will lodge a report against her,” she said.

The case against Cheng has since been dropped after the parties involved reached an agreement.

At today’s press conference, Cheng claimed that she was also refused access to the washroom during her detention and the police also did not arrange for an interpreter as she could only speak Mandarin.

Asked how she felt about the experience, a visibly upset Cheng replied: “I was very afraid and felt vulnerable. I am an old woman, why did the police treat me like this?”

“It was very cold in the lock-up and I could not stop crying but I was not given a chance to explain,” she added. Cheng was accompanied by her husband Walter Lim this morning.

Meanwhile, [Teresa] Kok, who put the police in a spot recently after exposing a video-clip of a detainee being forced to do ear squats in the nude, expressed regret that procedures continued to be flaunted.

“Why must she (Cheng) be stripped, this was not even a case of drug possession. The police have adopted a new body search rule but why is this still happening?” she asked.

“(The police) talked so much about rejecting the IPCMC (Independent Police Complaints and Misconduct Commission), but see, this (abuses) is still happening,” said the MP.

According to her, Cheng will be asked to identify the police personnel involved later today. Also present at the press conference was Parliamentary Opposition Leader Lim Kit Siang
Posted by KTemoc at 6:10 pm