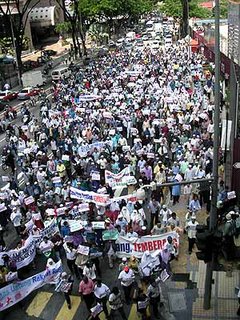 photo Malaysiakini
The word has come down from the very top. The PM doesn’t want newspapers to publish the public’s angry reaction to the fuel price increase.

It seems that the PM Department has ordered editors of all major newspapers to minimise any such news, including coverage of last Friday’s protest in Kuala Lumpur. Apparently, it would be still OK to report on the dissatisfied reactions but the editors were told to downplay the degree of opposition. But no poll of public opinion please!

Malaysiakini found out that, true to the PM’s requirement, all major local newspapers either published only the minimal info or nothing at all. Needless to say, Umno-linked News Straits Times, who was so daring about the Non Sequitur cartoons by publishing it twice, and Utusan Malaysia as well as Berita Harian, all did not report on the protest, but followed the example of MCA-owned The Star in limiting its publishing to comments by deputy PM Najib, who criticised the opposition for exploiting the unpopular but necessary price hike.

I have to say I agree with Najib on this occasion. Afterall, DAP’s Lim Guan Eng has agreed that the gradual removal of the fuel subsidy was necessary. I think it's wrong to whip up the public feelings for something that has to be done, and the sooner the better.

The Chinese-language dailies did run brief reports but not on the front page.

Today's The Star showed the PM in damage control. He said that while the 30 sen increase to fuel price has been due to the withdrawal of subsidy, that was only a part of the total subsidy the government continues to subsidize oil for Malaysians. I think this is worth something for Malaysians to carefully consider. I do feel sorry for the PM who has had to make the hard and unpopular but correct call. He assures all that the government itself will exercise prudence in its financial responsibility.

In this, I would like to see him re-tender the contract for PORR, because of the scandalous nature of its award, which would invariably lead to lack of value for public money invested. Let him (literally) put his money where his mouth is.