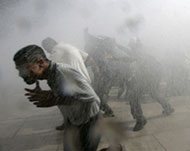 According to al Jazeera, Malaysian riot police have used water cannon to break up a protest against fuel price rises, the latest in a series of anti-government protests in Kuala Lumpur.

Malaysiakini has also updated its report to confirm that chemical-laced water was employed to disperse the crowd.

When the protest began at 10:10 am, the police warned the protestors that they would be given 10 minutes to disperse as it was an illegal gathering.

But MTUC leaders - president Syed Shahir Syed Mohamud and secretary-general G Rajasekaran – ignored the warning and gave speeches criticising the fuel price hike which has resulted in essential items becoming more costly. Then PKR and PAS made their speeches as well.

When the 10 minutes warning came to an end, the cops moved in. There were 50 members of the FRU and 100 general duties police officers. There was of course the dreaded water-cannon truck. The mounted police was also there with their crowd control steeds, and so were two police dogs.

G Rajasekaran, the MTUC secretary-general, said: "It was a peaceful protest. Nobody created unrest, we do not see the reason for the arrests. Our government is very intolerant of peaceful protests."

Apart from Dr Hatta and his 2 daughters, PAS Muslimat (women’s wing) leader Athirah Al-Jundi was also taken in by the police. But they were eventually released on police bail.

I think the Internal Security Minister, who's also the PM, had been a bit heavy handed to take such drastic action, but then, to be fair to him, nowadays we aren't quite sure who's in charge of the country - the PM or the Police?