FMT - What will be done to tackle Malaysia’s housing issues? (extracts): 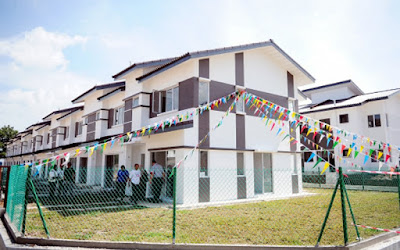 Housing and Local Government Minister Zuraida Kamaruddin is expected to release the much anticipated National Housing Policy this month.

Other areas likely to receive focus include the option of rent-to-own (RTO) schemes where tenants will be given the option to plan and buy their house after five years of renting.

These areas have been identified as cornerstones in the Pakatan Harapan (PH) government’s execution of its manifesto ... [...]

With an industry already reeling from the affects of a market correction, the government now has to balance increasing the supply of mid-to-luxury homes where demand has been slowing against the low supply of affordable housing in urban areas where a chronic demand continues to grow.

It is clear that the government is attempting to counter this by mooting specific policies and measures that address both these segments separately.

What low supply of affordable or low-cost housing, when people could ABANDON houses in, for example, Nibong Tebal, Penang.

The Star Online had on 09 Nov (last month) reported:

Abandoned by owners who seem to have given up hope, many privately-owned low-cost flats on mainland Penang have become slums. [...]

Despite the high demand for public housing in Penang, many low-cost flats on mainland Penang have eroded into squalid homes for the poor.

Most of the owners had stopped paying maintenance fees, either because they had moved out and abandoned their property, or the units had been repossessed by banks and no buyers could be found.

Coordinating officers of the Jawi constituency service centre took The Star to visit the Taman Bukit Panchor flats to highlight the plight of the few remaining residents trying to turn their place into homes.

I had then penned:

Considering the wailing, whinging and whining nationally by the homeless or/and young home-starters, isn't it a humongous shame that these low-cost flats in Taman Buklit Panchor have turned derelict into what are now slums. And this Taman is only one of several low-cost housing that have gone south.

I am afraid I have to say it's one of our Malaysia 'nasties'. We don't seem to be able to MAINTAIN things especially housing and buildings in good order, but would also illegally scavenge (pilfer) any items on those deserted properties.

The same old same old build brand new shining houses, then after a few years they would look like slums and possibly be abandoned. Podah.