Indonesia greatest author Pramoedya Ananta Toer, reknown throughout the literary world, and nominated several times for a Nobel Prize in literature passed away at 81 due to failing health. Apart from his 34 books and essays which have been translated into 37 languages Pramoedya had been internationally acclaimed as an outspoken champion of democracy. He was a man dedicated to his country and his people which could be seen through his work. 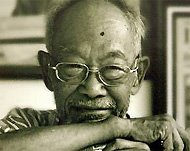 Pramoedya suffered two imprisonments, initially under the Dutch for anti-colonialism, then under Suharto for 14 years for his left leaning liberal beliefs. The post Suharto regimes have largely ignored the author even though it had been his ideas which galvanised the pro-democracy movements that toppled the former dictator.

Even during his imprisonment he overcame his restriction and the censorship to publish dozens of stories and novels about his country. His best-known works - the Buru Quartet novels about Indonesia's independence struggle against the Dutch - were written on scraps of paper and surreptitiously smuggled out while he was imprisoned on the remote island of Buru.

Pramoedya believed that the way to purge Indonesia of corruption would be to remove the entire group of bureaucrats and politicians tainted by the Suharto-era abuses, but no one listened to him, so corruption remains rampant in Indonesia today. Suharto’s cronies still remain in office today. His advice has significance for us.

He also wanted Indonesia to be an inclusive government that welcomed people from parts of the sprawling Indonesian archipelago outside the main island of Java, but the Javanese still hold the reins of power. Again, another lesson for us Malaysians.