Good but not good enough?

Yeo Chin Hooi picture scored 15 A1s. He has also an A2 for English and a B3 for English for science and technology.

15 A1s – Jeez, that’s a fantastic record in any language. And his parents are only a lorry driver and a factory worker, so obviously his ability to proceed on further studies would be financially limited. And bear in mind that despite his family financial situation, he did exceptionally well in his studies.

He likes to get into medical school but despite his outstanding achievements, he did not secure a scholarship from the Public Service Department (PSD). PSD has handed out 1300 government scholarships to young Malaysians to study in foreign universities, yet it couldn’t see in this young laddie’s achievement to award him one?

Yeo then applied for a Bank Negara scholarship but was also rejected. Maybe the PSD and Bank Negara didn't see in his academic achievements as being sufficient grounds.

Young Yeo reflected: "I don’t really know what to do next. My heart is set on becoming a doctor, and I have worked hard for the last two years to achieve this goal."

Needless to say, his parents were also deeply disappointed, and so were his teachers.

One teacher said Yeo deserved a scholarship because he was from a poor family and had studied hard. I tend to agree on the grounds that he came from a deprived background. Another teacher argued his results outshone those of the students named as the country’s top two.

Pity there’s no philanthropist as in the old days who would help this deserving student.

Meanwhile over at Kwan Inn Teng temple in Petaling Jaya, in conjunction with Wesak Day, the temple foundation gave scholarship aid to, among others, 5 Malay students. 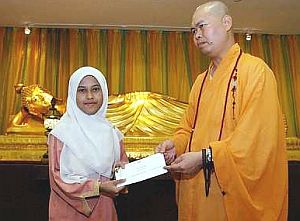 Temple spokesman Ann Tay said the recipients, all students from secondary schools and universities, were selected based on their family background first, then their academic qualifications.

She said: “We were very strict in selection, as some students have to work part-time to pay for their studies as their families are so poor.”

In other words, the temple awarded scholarships generally to the needy. Hmmm, sounds logical.

Marreta, who is from Sabah and studies Maths in UiTM, Shah Alam, said she was very happy to receive the cash gift. She said: “It was definitely unexpected. This is what multi-racial Malaysia is all about.”

Marreta pledged to return the gesture by donating to the temple once she graduates and starts work. Good on you, sweetheart!