Zaid Ibrahim, the BN MP for Kota Baru told the same press conference: "Shahrir’s resignation was never accepted by the members of BBC. It can accepted by someone else, but that’s irrelevant. He was elected by us (backbenchers) and he is answerable to us.” 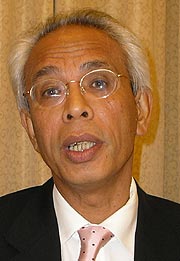 However, he denied that the Back Benchers Club (BBC) amounted to a challenge against Najib. He said:

Zaid, who incidentally is a lawyer, argued that it was not wrong for Shahrir to state his support or otherwise on the opposition motion since there was no specific written instructions from the whip. Therefore MPs should be allowed to vote based on their conscience and principle.

He reminded us that the power of the whip was limited to three areas under parliamentary democracy - to ensure that MPs were knowledgeable about motions or matters in the House, to advise the premier, and to impose the whip when the need arose.

Zaid continued: “We can also support the opposition. We don’t want our MPs to oppose for the sake of opposing, it must be based on merits... He (Najib) cannot instruct us beyond the (three) situations.”

Shahrir, who was also present at the press conference, stated coyly: “I stated that I resigned and it was accepted. But my (BBC) colleagues said I shouldn’t have submitted the resignation letter to the whip because it is not the whip who appointed me, they have their point also.”

Meanwhile, Lim Kit Siang failed in his attempt to move a second privilege motion to refer the Jasin MP to the privileges committee for investigation. The Speaker of the House said the motion must be moved at the time when the matter occurred or at the first available opportunity.