Couple of days ago PM Abdullah Ahmad Badawi announced Project Everest 2007 which will see Malaysian women climb the world’s highest mountain. He announced a RM 1.4 million funding for the project - probably money saved from the fuel subsidy and cancellation of the scenic bridge.

25-year old Marina Ahmad and 5 other ladies will attempt the climb in March next year in conjunction with Malaysia’s 50th anniversary. 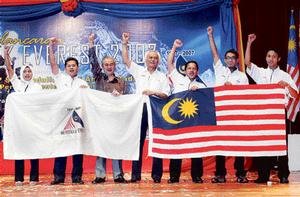 Utusan Malaysia which reported the launch of the project has been appointed as the official media for the project. The PM provided some pep talk blah blah blah and finally said:

Very very loose translation: “Our race shall be a race which requires challenging activities that call on our incomparable ability”.

The problem with the Malay word ‘bangsa’ (race) is that we Malaysians sometimes aren’t too sure whether it means the Malaysian or Malay race?

But I wish the hikers a safe journey and all the success, and am especially glad no one had suggested any silly idea like tasking the climbers to drape the mountain with a gigantic Malaysian flag a la the pyramid fiasco.